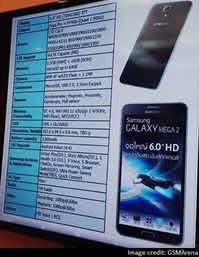 Previously the unannounced smartphone was spotted along with images and specifications in the database of China's Telecommunications Equipment Certification Center (Tenaa). The certified smartphone, bearing model number SM-G7508Q for China, is expected to be released as the Galaxy Mega 2 for China Mobile with TDD-LTE support (1900/ 2300/ 2600MHz).

Meanwhile, Samsung has already sent out invites for the launch of the much-anticipated successor to the Galaxy Note 3 at Unpacked 2014 Episode 2 event on September 3. In the meanwhile, the Samsung Galaxy Note 4 has been listed with price and specifications at an Indonesian e-commerce site, but as it is a third-party retailer - all details mentioned will have to be taken with a pinch of salt.
Affiliate links may be automatically generated - see our ethics statement for details.
Comments