Samsung Galaxy M20 has started receiving a new update that brings improvements to the charging performance. The software update also promises to fix a host of bugs and improves the overall stability, in addition to general performance improvements. The update is based on Android 8.1 Oreo with March security patch on top. The OTA is being rolled out to Samsung Galaxy M20 users in India, but there is no word whether the same has been released in other regions as well.

The new Samsung Galaxy M20 update, which carries the firmware version M205FDDU1ASD1/M205FODM1ASC2/M205FDDU1ASC2, is 73.53MB in size. It was first spotted by SamMobile, and our review unit has received it as well. The major change, as we mentioned above, is obviously the improved charging performance. But the changelog does not specifically detail the improvements it brings with regards to the charging output, whether it enhances the speed or anything else. 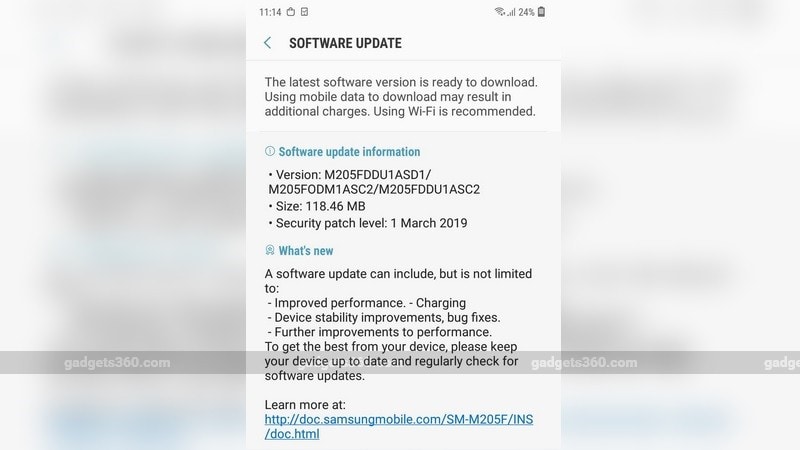 The new update for the Samsung Galaxy M20 is now being rolled out in India.

So far, we have also not come across any issues or reports related to charging issues on the Samsung Galaxy M20. The Galaxy M-series offering, despite being a lower mid-range device, packs a massive 5,000mAh battery and comes with support for 15W fast charging.

Additionally, the changelog mentions that the update brings device stability improvements, aside from fixing bugs. Moreover, it also promises to bring general performance improvements. Unfortunately, the latest OTA is still based on Android 8.1 Oreo. Although, the company's roadmap for Android Pie update release in the Samsung Members app suggests that the Samsung Galaxy M20 will get Android Pie at some point in August this year.