Samsung Galaxy M20 has received second software update just ahead of its formal sale in India. The new development comes less than a week after Samsung brought the first software update to the newly launched Galaxy M20 and Galaxy M10 models. Similar to the last version, the latest software update doesn't bring any major changes to the Galaxy M20. However, the changelog mentions that the update includes some stability improvements and bug fixes as well as performance enhancements. It can be expected that the new software update fixes the slight lags that we noticed on the interface front of the Galaxy M20 at the time of our review.

The new update for the Samsung Galaxy M20 is 68.06MB in size and brings software version M20FDDU1ASAF. Notably, the new version doesn't upgrade the existing January 2019 Android security patch. The changelog provided with the update, however, does mention that the update includes device stability improvements, bug fixes, and improvements to the performance. These are similar to what was featured in the changelog of the previous software update that emerged late last month.

SamMobile first reported the latest software update for the Samsung Galaxy M20. We were able to spot the update on our review unit. Moreover, the update is expected to be available over-the-air following the availability of the Galaxy M20 in India. 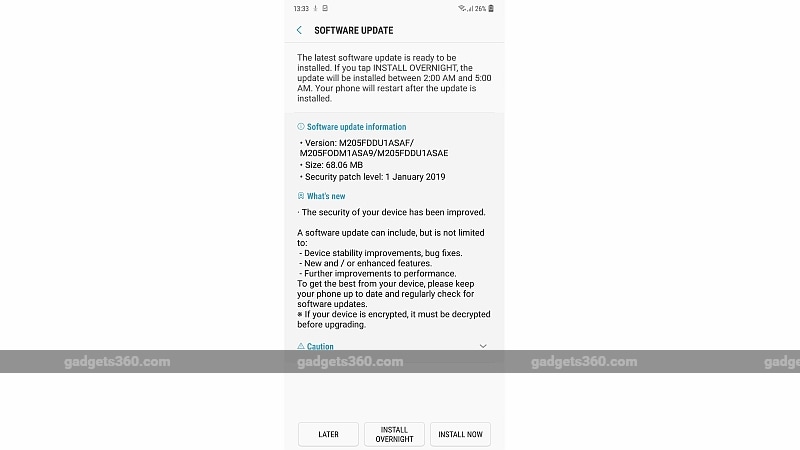 For pictures and videos, the Galaxy M20 has a 13-megapixel primary sensor along with an f/1.9 aperture and a 5-megapixel ultra-wide sensor. There is also an 8-megapixel camera sensor at the front.

The Galaxy M20 has 32GB and 64GB onboard storage options that both are expandable via microSD card (up to 512GB). The smartphone also has a fingerprint sensor at the back. Besides, it packs a 5,000mAh battery.