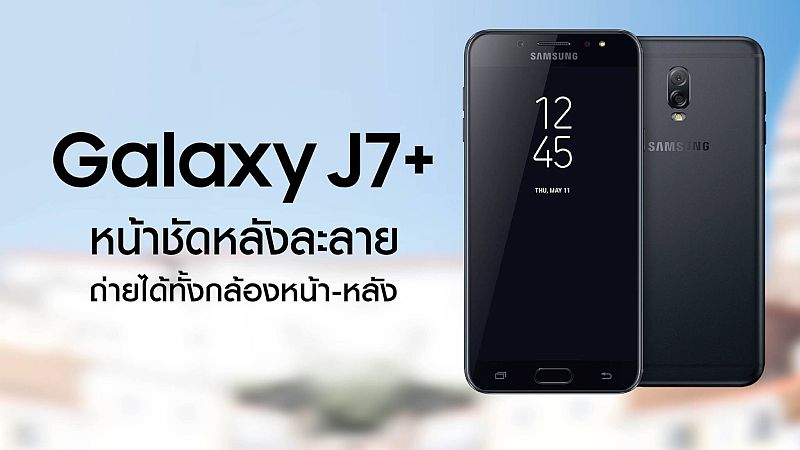 Samsung's anticipated Galaxy J7+ smartphone has been making some ripples in the market thanks to its rumoured dual camera setup, and it is expected to be revealed soon. After live images of the Samsung Galaxy J7+ surfaced earlier this week, pricing and availability details of the yet-to-be-announced handset have been leaked thanks to promotional material.

The new Samsung smartphone is widely expected to be made available in Thailand first, and is said to be priced at THB 12,900 (roughly Rs. 25,000). The promotional material, first reported by Flashfly, suggests that the handset will go on pre-orders starting Friday until September 17 in the country. The Samsung Galaxy J7+ is expected to go on sale starting September 22, and Thailand is likely to be the first market where the handset will be made available. Unfortunately, there's no word on launch of the Galaxy J7+ as of now.

One of the biggest highlights of the Galaxy J7+ is said to be the vertical dual camera setup at the back. The phone is rumoured to sport a 13-megapixel camera with an f/1.7 aperture and a 5-megapixel camera with an f/1.9 aperture. There's also a 16-megapixel front-facing camera on the smartphone. Another notable feature is said to be support for Samsung's virtual assistant Bixby and facial recognition. It is interesting to see Samsung adding facial recognition feature to its mid-range phones, such as the Galaxy On Max and Galaxy J7 Max - and now most likely, the Galaxy J7+.

For other specifications, the Samsung Galaxy J7+ is likely to sport a 5.5-inch full-HD (1080x1920 pixels) Super AMOLED display and pack 3000mAh battery. The phone is said to come in 4GB RAM and 32GB storage option while support expandable storage via microSD card (up to 256GB). Featuring a metal body, the phone is said to run Android 7.1.1 Nougat and come with fingerprint sensor embedded in the home button.