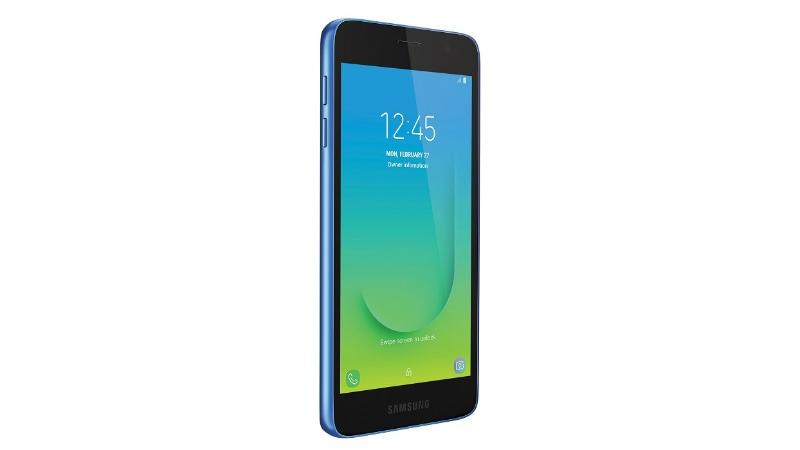 The Samsung Galaxy J2 Core price in India has been set at Rs. 6,190. The smartphone comes in Gold, Blue, and Black colour options and will go on sale starting today through all retail stores and Samsung eShop in the country.

The dual-SIM (Nano) Samsung Galaxy J2 Core runs Android 8.1 Oreo (Go edition) along with a bunch of preloaded features, including Optimised Data Control and Ultra Data Saving. The smartphone sports a 5-inch qHD (540x960 pixels) TFT display. It is powered by a quad-core Exynos 7570 SoC, coupled with 1GB of RAM. On the optics part, there is an 8-megapixel sensor at the back along with an f/2.2 aperture and an LED flash. The Galaxy J2 Core also has a 5-megapixel sensor at the front. Further, it includes a Beauty Mode that is touted to offer users better portraits and selfies.

Samsung has provided 8GB of onboard storage on the Galaxy J2 Core that is expandable via microSD card. On the connectivity front, the handset has 4G VoLTE, Wi-Fi 802.11 b/g/n, Bluetooth v4.2, GPS/ A-GPS, Micro-USB, and a 3.5mm headphone jack. Sensors on board include an accelerometer and a proximity sensor. Notably, there isn't any fingerprint sensor to help you quickly unlock the screen using your finger. The handset neither has a Face Unlock functionality. There is a 2,600mAh battery that is rated to offer an all-day experience on a single charge. Besides, the smartphone measures 143.4x72.1x8.9mm and weighs 154 grams.

"Galaxy J2 Core reiterates Samsung's commitment towards meaningful innovations that delight our customers. We are pleased to integrate industry-first smart memory management solutions that allow apps or content on the memory card. We are also pleased to partner with Google in bringing the latest Android experience for entry-level smartphones with Oreo (Go edition) on Galaxy J2 Core. This approach eradicates current consumer pain points by opening apps 15 percent faster, delivering 2X storage out of the box, and allowing consumers to stream content for up to 11 hours on YouTube Go. This is indicative of Samsung's commitment to a digitally enabled India by allowing our customers to Go Faster & Go Longer," said Sumit Walia, Director, Mobile business, Samsung India, in a press statement.