Back in December last year, the roadmap on the Samsung Members app suggested that the Galaxy J4 and Galaxy J4+ will receive the Android Pie update sometime in May. However, the South Korean company hasn't yet revealed any update schedule for the Galaxy J2 Core. 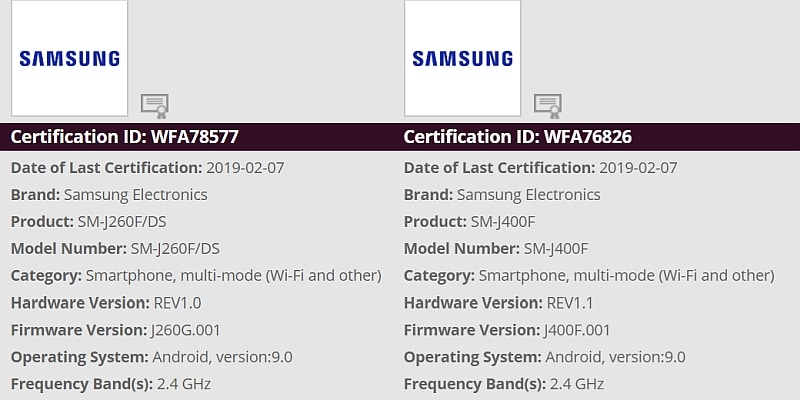 The Samsung Galaxy J2 Core debuted in India last August with Android 8.1 Oreo (Go edition). Being an Android Go model, the phone doesn't have any impressive specifications. It even comes with 1GB of RAM and has an inferior, 5-inch qHD (540x960 pixels) TFT display panel.

However, Samsung is likely to push Android 9 Pie (Go edition) for the Galaxy J2 Core to deliver the latest experience. The handset may also run One UI on top of the optimised platform that was announced last year.

The revelation through the listing featured on the Wi-Fi Alliance website certainly confirms the Android Pie update for both the Galaxy J2 Core and Galaxy J4. That being said, it is unclear that when will the new update hit the devices publicly.

Samsung is currently testing Android Pie through One UI beta on the Galaxy S8, Galaxy S8+, and Galaxy Note 8. However, the Galaxy S9 models and the Galaxy Note 9 recently received the new update in select regions, including India.