Samsung Galaxy J2 (2018) Listed on Official Site Ahead of Launch 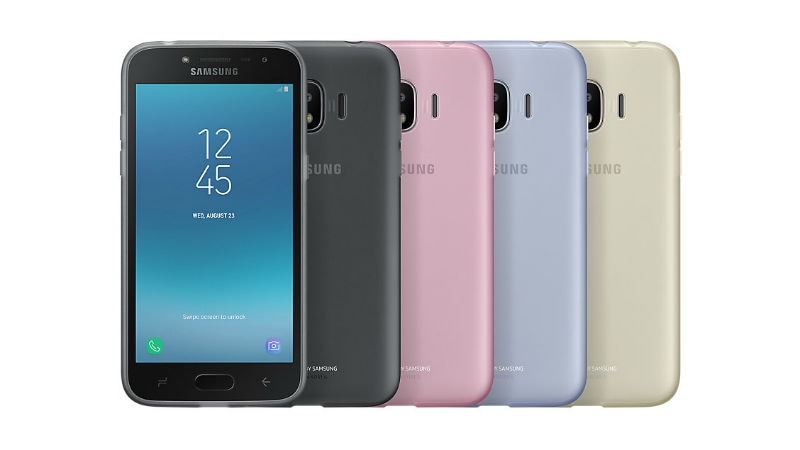 Samsung Galaxy J2 (2018), which was lately spotted on a Russian e-commerce site and was initially leaked in some early renders, has now surfaced on Samsung's official site in Russia. The formal listing interestingly shows a case that has been designed for the Galaxy J2 (2018). Samsung Russia has listed the case for the Galaxy J2 (2018) in multiple colours, including Black, Blue Coral, Gold, and Pink. These all can be expected to be the colour options for the handset as well. Some previous reports claimed that the handset will be available in Russia and some emerging markets around the globe in the coming weeks.

The official listing of the Samsung Galaxy J2 (2018) case confirms that the handset will have aesthetics similar to the last year's Galaxy J2 (2017). There is a home button on the front that accompanies two capacitive keys on its either sides. The front view of the smartphone also confirms the existence of a selfie LED flash. On the bottom, the listed images show that the smartphone has Micro-USB and a microphone. The rear side hosts the primary camera sensor with an LED flash and a loudspeaker grill. The images also point to the presence of a 3.5mm audio jack.

The official listing neither reveals any details about the availability and prices of the cases nor of the Samsung Galaxy J2 (2018). However, the listing on Russia's BeCompact.ru that was spotted last month details that the Galaxy J2 (2018) with model number SM-J250F will be available with a price tag of RUB 7,990 (roughly Rs. 8,860). This is a bit higher than the price of the Galaxy J2 (2017) that went on sale in India back in October at Rs. 7,390.

The listing on BeCompact.ru also mentioned some of the key specifications of the Samsung Galaxy J2 (2018). It showed that the dual-SIM Android smartphone features a 5-inch qHD (540x960 pixels) Super AMOLED display. It has a Qualcomm Snapdragon 425 (MSM8917) SoC with a quad-core 1.4GHz CPU, coupled with 1.5GB of RAM. The handset sports an 8-megapixel rear camera sensor with an LED flash and has a 5-megapixel front camera sensor with a selfie flash. Also, the site confirmed that the new Galaxy J2 model will come with 16GB storage that will be expandable via microSD card. The smartphone is also listed with connectivity options such as 4G VoLTE, Wi-Fi 802.11 b/g/n, Bluetooth 4.1, GPS/ A-GPS, and Micro-USB and packs a 2600mAh battery.