The Samsung Galaxy J2 (2016) has been priced at Rs. 9,750 and will be available to buy via online as well as offline retailers starting July 10. The smartphone will come in Black, Gold, and Silver colours. As promotional offer, Samsung is offering 6 months of free double data offer to Airtel prepaid customers worth Rs. 4,500.

One of the biggest highlights of the new Galaxy J2 (2016) is its next-generation LED notification system which Samsung calls Smart Glow. The feature allows users to colour-code any contact, app, or phone usage alert. The new Smart Glow feature can be activated from the Quick panel. The Smart Glow can be utilised for three usage scenarios: for Priority alerts, Usage alerts, and Selfie Assist.

For Priority alerts, users will have to drag and drop the contact or app onto the '+' in the ring after enabling the Smart Glow feature. Users can select and save the Smart Glow colour for any particular contact or app. After that, whenever there's an alert from that particular app or the user, the LED will glow in the corresponding colour. Users will be allowed to set up to 4 alerts. For Usage Alerts, Smart Glow will inform users on battery, data, or storage related information. 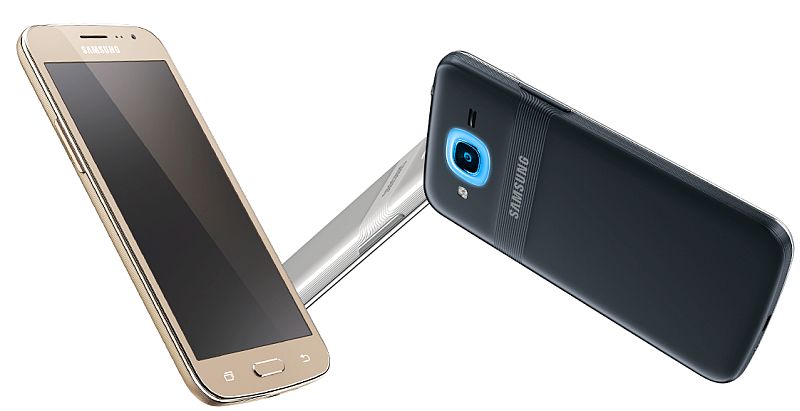 The Selfie Assist feature will allows users to take framed selfies via the rear camera. The LED notification ring lights up completely when it detects a properly aligned face and takes the selfie automatically.

At launch, Samsung also revealed the new Turbo Speed Technology (TST) which comes preloaded in the Galaxy J2 (2016). The feature enhances the performance of the smartphone and is claimed to load apps up to 40 percent faster than devices with double the RAM. The new Turbo Speed Technology is also said to shut down idle processes running in the background to free the RAM.

For specifications, the Samsung Galaxy J2 (2016) features a 5-inch (720x1280 pixels) Super AMOLED display and is powered by a 1.5 GHz quad-core processor paired with 1.5GB of RAM. The handset comes with 8GB of inbuilt storage and supports expandable storage up to 32GB via microSD card. The Android 6.0 Marshmallow based Galaxy J2 (2016) supports dual-SIM. It sports an 8-megapixel rear camera with LED flash. The handset also sports a 5-megapixel front camera.