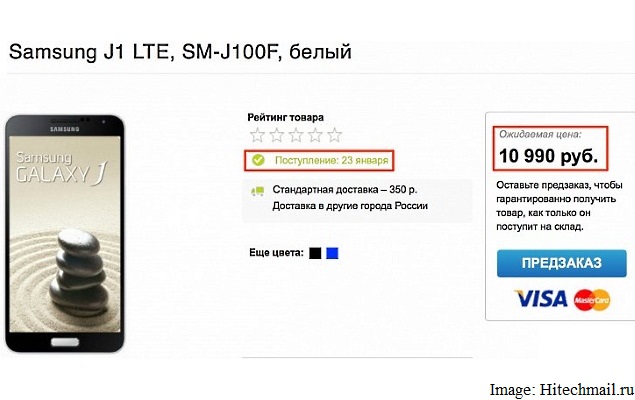 Samsung's anticipated entry-level 4G LTE smartphone, the Samsung Galaxy J1, which was leaked in December by a Russian website Merlion, has now been listed on a Russian online store with pricing of RUB 10,990 (approximately Rs. 10,000).

According to Hitechmail.ru, the phone is expected to start shipping in Russia from January 23. Notably, Samsung is yet to officially announce the smartphone.

The purported specifications for the Galaxy J1 (SM-J100F) published by the GFXBench include a 4.8-inch WVGA (480x800 pixels) display; a quad-core 1.2GHz processor; 768MB or 1GB of RAM; 5-megapixel front and back cameras, and 4GB of built-in storage.

Last month, the Russian website Merlion had leaked the specifications of the device for the first time. The website had suggested that the Galaxy J1 will be a dual-SIM smartphone with 4G LTE and 3G support. It also said that the device will sport a smaller 4.3-inch WVGA (480x800 pixels) display with Mali-400 GPU. Other specifications tipped in December had included almost identical specifications as GFXBench.

Other purported specifications by Russian website Merlion include a Spreadtrum SC6815 chipset with quad-core Cortex-A7 processor clocked at 1.2GHz; Mali-400 GPU; 1GB of RAM; 5-megapixel front and back cameras, and 4GB of built-in storage.