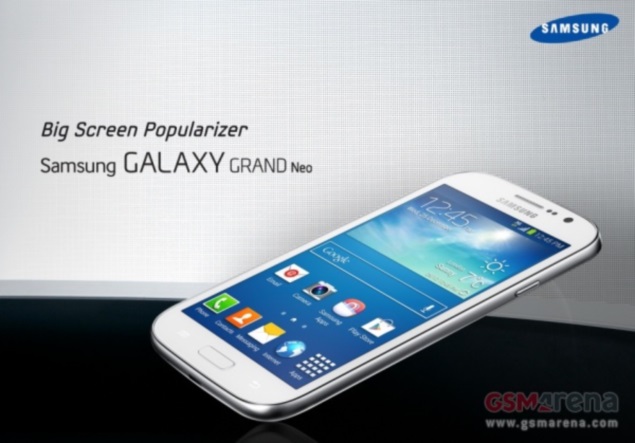 One of the rumoured variants of Samsung Galaxy Grand, the Galaxy Grand Neo, will launch in Europe in mid-February 2014, according to a new report, which also quotes a price of 300 euros (roughly Rs. 25,000) after taxes, expectedly fitting it into the mid-range segment.

For now, Samsung has not yet acknowledged or detailed the Galaxy Grand Neo. Recently enough, Samsung Galaxy Grand Neo's complete specification list was leaked via some internal documents surfaced online by GSMArena.

According to the leaked documents, the alleged Samsung Galaxy Grand Neo will run Android 4.2 Jelly Bean out-of-the-box with company's TouchWiz on top. The smartphone is likely to be powered by a 1.2GHz quad-core A7 processor (unspecified chipset) with 1GB of RAM.

The documents further indicated that the handset sports a 5-megapixel rear camera with LED flash, alongside VGA front-facing camera. The Galaxy Grand Neo is said to come with 8GB of inbuilt storage with expandable storage support. Connectivity options are said to include Bluetooth, Wi-Fi, Wi-Fi Direct, GPS/ AGPS, 3G, GLONASS, and Micro-USB. The smartphone is rumoured to boast dimensions 143.7x77.1x9.6mm. The smartphone is also said to pack a 2100mAh battery.

Samsung finally launched the Galaxy Grand 2 for the Indian market in December last year. However, the company is yet-to-announce the final price of the smartphone, though it did give a tentative price range between Rs. 22,900 and Rs. 24,900.