Samsung has launched a new mid-range smartphone, the Galaxy Grand Max, in Korea. The smartphone had been spotted late last month.

The Samsung Galaxy Grand Max is now officially listed on the company's Korea store and has been priced at SKW 3,70,000 (Rs. 21,200 approximately). The company notes that the new Galaxy Grand Max will also be available to buy from three major carriers (LG+, SKT, and Olleh) in Korea.

As of now, there is no word whether the South Korean handset giant will be launching the Samsung Galaxy Grand Max outside Korea.

It features a new pattern on the rear panel, which is one of the most notable features of the smartphone. The Android-based (unspecified version) Galaxy Grand Max supports single SIM (Micro-SIM). It features a 5.25-inch (720x1280 pixels) HD TFT display. It is powered by a 1.2GHz quad-core (unspecified chipset) processor that's coupled with 1.5GB of RAM. 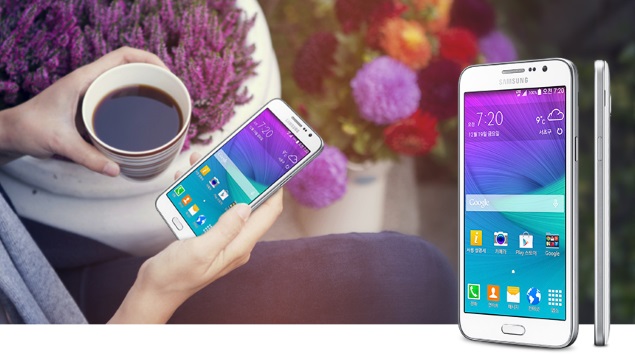 Samsung Galaxy Grand Max bears 16GB of built-in storage that can be expanded via microSD card (up to 64GB). It features a 13-megapixel rear camera with CMOS sensor, LED flash, and a 5-megapixel front-facing camera that comes with 120 degree wide viewing angle lens.

In India, Samsung on Tuesday launched the metal-clad Galaxy A3 and Galaxy A5 smartphones in India, priced at Rs. 20,500 and Rs. 25,500 respectively.

Besides launching the Galaxy A3 and Galaxy A5 smartphones, Samsung also unveiled two mid-tier smartphones in new Galaxy E-series - the Samsung Galaxy E5 and the Galaxy E7 priced at Rs. 19,700 and Rs. 23,000 respectively.