The Samsung Galaxy Grand 2 is now listed in a new Gold colour variant on the company's India e-store.

As of now, the Gold colour variant of the Galaxy Grand 2 is listed as 'Not in Stock' and a 'Notify Me' option is available for interested consumers.

Initially unveiled in January, the Galaxy Grand 2 was priced at Rs. 22,999 and was only available in White colour variant; however, Samsung later released two more colour variants of the handset -Black and Pink.

The smartphone was launched with Android 4.3 Jelly Bean; however, Samsung started rolling-out the Android 4.4.2 KitKat update for the Galaxy Grand 2 in India last month.

The Galaxy Grand 2 is a dual-SIM device with support for GSM+GSM and features a 5.2-inch TFT display with a resolution of 720x1280 pixels. 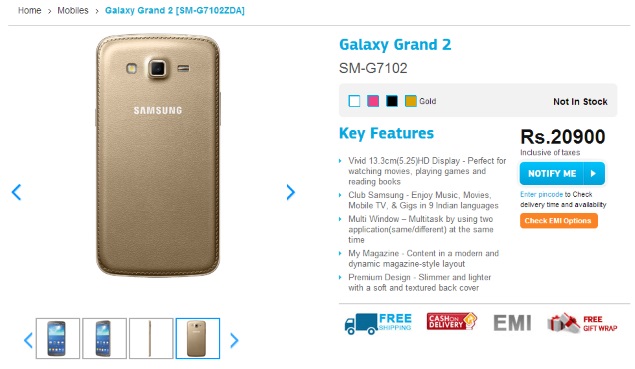 The new colour variant of the Galaxy Grand 2 was first spotted by Sammy Hub.

Last week, Samsung, as expected, started sending invites for its Unpacked 2014 Episode 2 event scheduled on September 3, where the company is likely to debut its next-generation Galaxy Note smartphone - expected to be called the Galaxy Note 4.