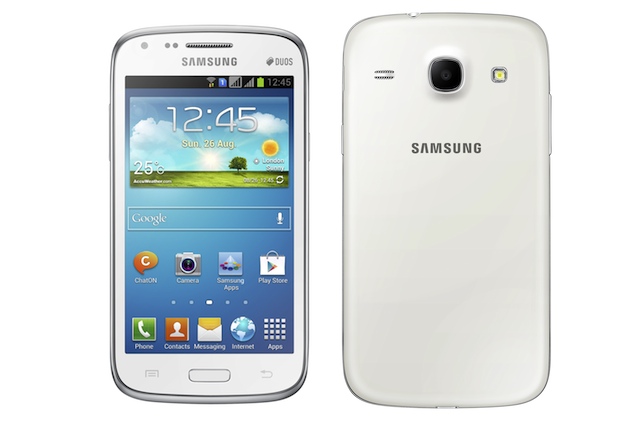 Samsung has officially taken wraps of its new mid-range Android smartphone, Galaxy Core. The phone, which was leaked online, last week, sports a 4.3-inch screen with a 480x800 pixels resolution. Powered by a 1.2GHz dual-core processor, the smartphone has 1GB of RAM and runs Android 4.1 Jelly Bean and feature Samsung's TouchWiz interface layer on top.

The phone sports a 5-megapixel rear camera and a VGA front facing camera. It offers 8GB of internal storage which can be expanded through a microSD card. It also offers Wi-Fi, Bluetooth 3.0 and GPS connectivity options. The phone comes with an 1800 mAh battery.

Samsung has announced that the Galaxy Core will be available in two different versions - a single-SIM version which would be available from July and a dual-SIM version that would start selling from May, depending on the market. There's no specific information about availability and pricing in India.

The phone will offer some new smart features borrowed from some of its high-end sibling including Smart Stay that recognizes when a user is looking at the phone, and saves battery life when a user looks away by dimming the screen and powering down using advanced facial recognition, Smart Alert that alerts the user to missed calls and messages when the device is picked up, Motion UI that activates common functions such as refresh or mute with simple motion commands and S Voice, Samsung's own voice assistant.