As of now, there is no official word on the availability details of the Samsung Galaxy Core Prime; though, we expect that the company will likely announce the availability of the smartphone soon.

Interestingly, the Flipkart listing for the Galaxy Core Prime (SM-G360HZWDINS) now says "This product is permanently discontinued" and has also removed the pricing completely. 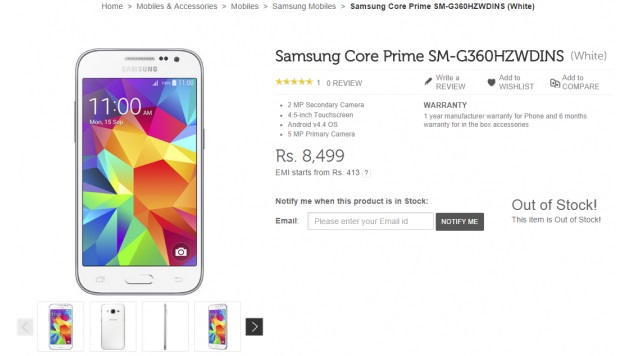 First spotted by GSMArena, the new Samsung Galaxy Core-series handset was also listed at Tenaa (Chinese equivalent of FCC) with three versions - SM-G3606, SM- G3608, and SM-G3609. The Galaxy Core Prime is reportedly said to come in a dual-SIM variant as well as offer LTE connectivity, according to the Tenaa listing.

Of course, since this is a third-party store, one cannot be certain if this will be the official launch price and even the specifications might change when the phone is finally unveiled.

According to the Flipkart listing, the Galaxy Core Prime will come with single SIM support and feature a 4.5-inch WVGA (480x800 pixels) PLS (plane-to-line switching) display. It is powered by a 1.3GHz quad-core processor and runs Android 4.4 KitKat out-of-the-box.

It comes with 8GB of inbuilt storage and supports expandable storage via microSD card (up to 64GB). There is 1GB of RAM onboard. The Galaxy Core Prime is listed to include a 5-megapixel rear and 2-megapixel front camera. There is a 2000mAh battery onboard. Unfortunately, there is no word on 3G and LTE connectivity support on the Flipkart listing.

Last month, Samsung launched the Galaxy Grand Prime in India at Rs. 15,499. The highlight of the selfie-focused smartphone is its 85-degree wide angle lens on the 5-megapixel front facing camera, while there is an 8-megapixel autofocus rear camera also onboard.