The smartphone was listed as 'out of stock', at the time of writing, and the company is now offering a Notify Me option for interested consumers. Much like the Samsung Galaxy Core Prime smartphone launched last year, the new Core Prime VE variant runs Android 4.4 KitKat out-of-the-box. 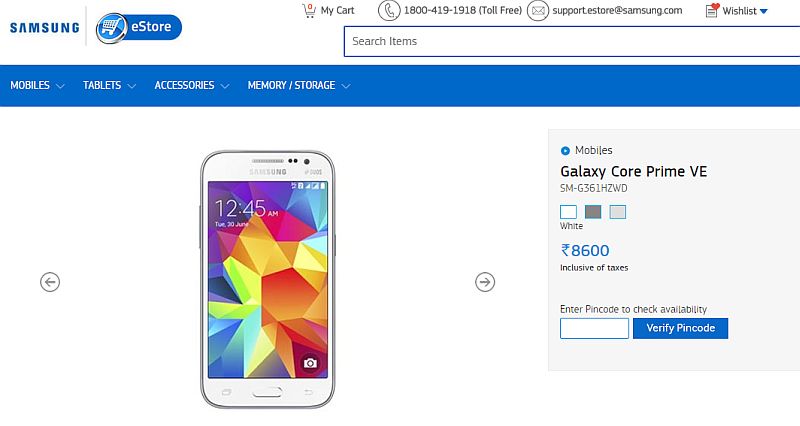 The Galaxy Core Prime VE sports a 5-megapixel autofocus rear camera, and a 2-megapixel front camera. There is a 2000mAh battery onboard. The connectivity options on the handset include Wi-Fi b/g/n, Wi-Fi Direct, Wi-Fi Hotspot, Bluetooth 4.0, GPS, and 3G.

The Galaxy Core Prime includes an accelerometer and proximity sensor, apart from measuring 130.8x67.9x8.8mm and sporting a matte body finish with metal sides. The official listing notes that the handset features Ultra Power Saving Mode that can offer up to 1.2 days of standby time with just 10 percent battery.

Earlier this month, Samsung India launched its new Galaxy J2 smartphone, priced at Rs. 8,490. The new entry-level 4G smartphone will be going on sale in India on Monday. The Samsung Galaxy J2 is the successor to the Galaxy J1 that was launched earlier this year. The company had announced that the new Galaxy J2 was developed at its India R&D facility.