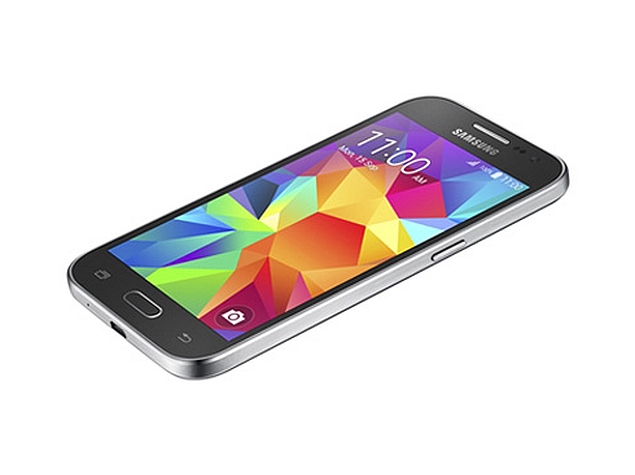 Without an announcement, Samsung has quietly changed the 'not in stock' status of its new budget Galaxy Core Prime smartphone on the company's India e-store to 'in stock'. Priced at Rs. 9,700, the smartphone was listed earlier this month on the company store with no word on availability.

It comes with 8GB of inbuilt storage, and supports expandable storage via microSD card (up to 64GB). The Galaxy Core Prime is said to include a 5-megapixel autofocus rear camera, and a 2-megapixel front camera. There is a 2000mAh battery onboard. The connectivity options on the handset include Wi-Fi b/g/n, Wi-Fi Direct, Wi-Fi Hotspot, Bluetooth 4.0, GPS, and 3G.

The Galaxy Core Prime includes an accelerometer and proximity sensor, apart from measuring 130.8x67.9x8.8mm and sporting a matte body finish with metal sides. It is currently listed in three colour variants - Charcoal Grey, White, and Silver.

Last month, Samsung's dual-SIM variant of the metal-clad Galaxy A5 was listed on company's China website. Listed on Samsung's China website as the Galaxy A5 (SM-A5000), the smartphone came with dual Nano-SIM support, and packs the same specifications as the single-SIM Galaxy A5.

In the meanwhile, Samsung's much awaited but never officially confirmed first Tizen smartphone, the budget Z1, has been leaked in all its glory at a purported retail partners meet in Mumbai on Monday.

Expected to be priced at Rs. 5,700 (based on a report quoting a Samsung executive who also mentioned a January 18 launch date), the Samsung Z1 smartphone was seen to sport a 4-inch WVGA (480x800 pixels) display; a 1.2GHz dual core processor coupled with 1GB of RAM; a 3-megapixel rear camera; a 0.3-megapixel front camera with f/2.4 aperture; 4GB of inbuilt storage expandable via microSD card (up to 32GB), and a 1500mAh battery. Connectivity options are said to include 3G, Wi-Fi, and Bluetooth 4.0.