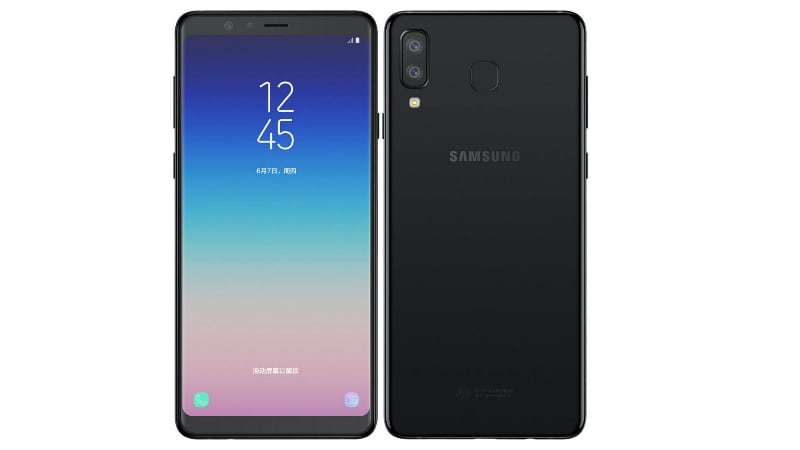 The Samsung Galaxy A9 Star price has been set at CNY 2,999 (roughly Rs. 31,600). It comes in Black and White colour variants. The Galaxy A9 Star Lite, on the other hand, has been priced at CNY 1,999 (roughly Rs. 21,100). The smartphone will arrive in Black and Blue colour models. Both the handsets are available for pre-order through Samsung online store in China till June 14. The smartphones will go on sale starting June 15. There is no clarity on whether Samsung will launch the smartphones in India as of yet.

The more expensive Samsung Galaxy A9 Star comes with a metal frame, visible chins at the top and bottom of the display, and a fingerprint scanner at the back. It stacks a dual vertical camera sensor, and has the power button housed on the right edge, while the volume rocker is housed on the left.

In terms of optics, the Samsung Galaxy A9 Star has a dual camera setup with a 16-megapixel primary sensor with LED flash and f/1,7 aperture, and a 24-megapixel secondary sensor. It has a 24-megapixel camera at the front with f/1.0 aperture and AI beauty features. The Galaxy A9 Star is equipped with 3700mAh battery capable of fast charging. Connectivity options include 4G VoLTE, Wi-Fi 802.11ac (2.4/5GHz), Bluetooth 5 LE, GPS with GLONASS. The dimensions are at 162.4x77x7.5mm, and the smartphone weighs 188 grams. It comes with Bixby Assistant support as well.

The Samsung Galaxy A9 Start Lite is seen sporting a metal unibody, visible antenna bands, a centre-placed vertical dual camera setup, a fingerprint scanner beneath it, and visible chins at the top and bottom of the display. The volume rocker is housed on the left edge, while the power button is housed on the right edge.

Coming to the Samsung Galaxy A9 Star Lite specifications, the smartphone variant appears to differ from the other in terms of display size, processor, camera and battery. The handset has a smaller 6-inch full-HD+ (1080x2220 pixels) Super AMOLED Infinity display with an 18.5:9 aspect ratio. It is powered by a 1.8GHz Snapdragon 450 octa-core SoC paired with Adreno 506 GPU.

The Galaxy A9 Star Lite comes with a dual camera setup with the same primary sensor, but the secondary sensor is at 5-megapixel only. The front camera is at 24-megapixel with a f/1.9 aperture and LED flash support. This smartphone is powered by a smaller 3500mAh battery, and supports Samsung Pay Mini. Connectivity options include 4G VoLTE, Wi-Fi a/b/g/n (2.4/5GHz), HT40, Bluetooth 4.2 LE, GPS, and 3.5mm audio jack. The dimensions measure at 162.2x75.7x7.9mm, and the smartphone weighs 191 grams.