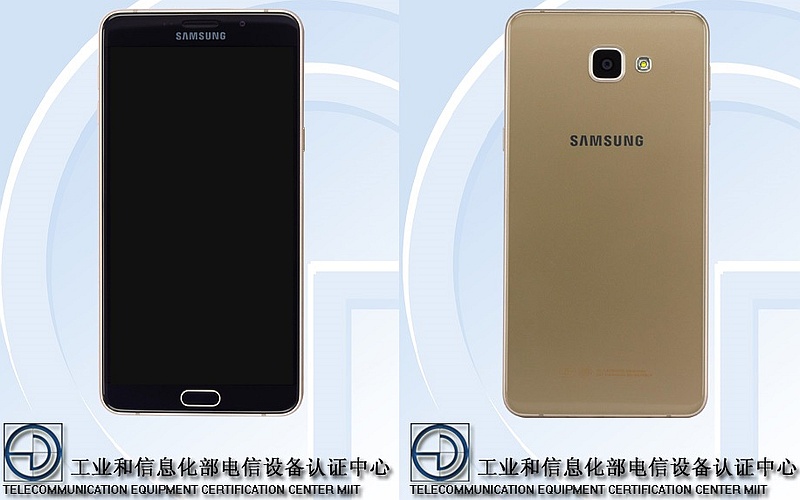 Until now we have seen the unannounced Samsung Galaxy A9 smartphone listed on the company website, apart from being shown in promotional images, benchmarks and in unofficial videos as well. However, the smartphone now appears to have passed Tenaa, Chinese telecommunications certification authority. Bearing model name SM-A9000, the listing confirms most of the specifications that have been surfacing on the Web for the past few months. The listing shows the smartphone in images too.

As per the Tenaa listing of the SM-A9000, thought to be the Samsung Galaxy A9, the smartphone features a 6-inch full-HD (1080x1920 pixels) resolution Amoled display and will pack an octa-core Qualcomm Snapdragon 620 CPU under-the-hood clocked at 1.8GHz that's clubbed with 3GB RAM.

Furthermore, the 4G LTE-supporting handset in question might arrive featuring a 13-megapixel rear camera and an 8-megapixel front-facing camera - to put that in perspective, the Galaxy A7 (2016) features a 13-megapixel rear camera and a 5-megapixel front-facing camera. Also seen in the Tenaa listing is 32GB of inbuilt storage, which can be expanded via microSD card (up to 128GB). Backed by a 4000mAh battery, the Galaxy A9 is listed to measure 161.7x80.9x7.4mm, weigh 200 grams, and run Android 5.1.1 Lollipop. It will be available in Gold and White colour variants.

The Galaxy A9, which went official with a company listing last month, is rumoured to launch early next year and be priced at around CNY 3,000 (approximately Rs. 32,000). In one of the promotional images, the Galaxy A9 was seen with reverse charging support. The leaked images also claim that the Galaxy A9 will sport Samsung Pay and will pack fingerprint scanner.

The South Korean company, earlier this month, unveiled the second-generation Galaxy A-series smartphones, namely the Galaxy A3 (2016), Galaxy A5 (2016), and Galaxy A7 (2016). The Galaxy A9 is said to be marketed as the biggest sibling of the same series.