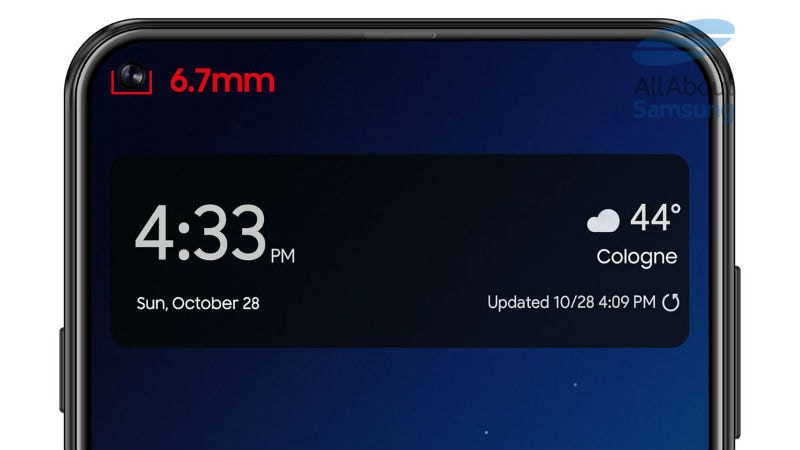 The cutout of Samsung Galaxy A8s selfie camera is said to be 6.7mm in size

Samsung may soon launch its Galaxy A8s smartphone that is expected to be the first handset from the company to sport an Infinity-O display. The design of the upcoming Galaxy A8s that includes a small circular cutout for the selfie camera has been spotted in various new leaks. Some reports have also leaked the screen protector of the notchless phone with a display hole. Additionally, a report has leaked the specifications of the smartphone also suggesting that Samsung may launch the handset in January 2019.

As per a report in German site AllAboutSamsung, the Samsung Galaxy A8s sports a 6.39-inch display with full-HD+ resolution. It is expected to feature an LCD display. The smartphone packs a 3,400mAh battery and comes with USB Type-C support. The report claims that the Galaxy A8s is powered by the Qualcomm Snapdragon 710 SoC, paired with 6GB of LPDDR4 RAM. The phone is said to be equipped with 128GB of inbuilt storage, expandable via microSD card (up to 512GB).

In terms of cameras, the Samsung Galaxy A8s is said to bear 24-megapixel, 5-megapixel, and 10-megapixel sensors at the back. At the front, there is a 24-megapixel sensor that will be placed in a display hole. The size of the hole is said to be 6.7mm. In terms of dimensions, the smartphone measures 159.11x74.88x7.38mm. The report claims that the smartphone will launch in January in a Black-Grey gradient colour option.

Some of the leaked details have further been corroborated in another report that has also posted a render of the alleged Galaxy A8s handset. As per a tweet by SamsungMobile.News, the cutout of Samsung Galaxy A8s front camera is 6.7mm in size. It also claims that the upcoming Samsung Galaxy S10 will also adopt the Infinity-O display, but with a 2mm to 3mm smaller cutout. It is, however, not clear which Galaxy S10 variant will sport the Infinity-O display.

Meanwhile, noted tipster Ice Universe has leaked an alleged screen protector of the Galaxy A8s. The leaked image showcases an in-screen cutout in the upper left corner of the display. The tipster has also claimed that the Samsung Galaxy A8s will launch in December this year itself.

To recall, Samsung had announced its new display plans back at SDC, with the Infinity-O type display featuring the hole design. Meanwhile, Chinese mobile maker Huawei also looks to compete with Samsung by launching a new smartphone with the same design as the rumoured Galaxy A8s.