Samsung Galaxy A8 With Fingerprint Sensor Launched at Rs. 32,500

Samsung has launched its slimmest smartphone, the Galaxy A8, in India. Priced at Rs 32,500, the Samsung Galaxy A8 is just 5.9mm thick but is not the slimmest in the market. Handsets like Gionee Elife S7, Oppo R5 and Vivo X5Max are 5.5mm, 4.85mm and 4.75mm thick respectively. The Samsung smartphone will be available in Black, White, and Gold colour variants from Monday.

The Android 5.1.1 Lollipop-based Samsung Galaxy A8 runs TouchWiz UI on top and features two Nano-SIM slots, of which one also acts as a microSD card slot. This means that users would either get a dual-SIM support without a microSD card storage expansion or a single-SIM support with microSD card expansion. The smartphone boasts metal side bezels, near bezel-less screen and appears similar to the flagship Galaxy S6 from the front. However, besides its slim profile, the company has managed to squeeze in a fingerprint sensor, which also doubles as the home button.

As for the specifications, the Samsung Galaxy A8 houses a larger display, better camera, and a bigger battery over its predecessor, the Galaxy A7. The device equips a 5.7-inch full-HD (1080x1920 pixels) resolution Super Amoled display and runs on the octa-core Samsung Exynos 5430 SoC (four cores clocked at 1.3GHz, and four at 1.8GHz) instead of the 64-bit Qualcomm Snapdragon 615 processor used in the China variant. It is coupled with 2GB of RAM. The smartphone has been launched in India with 32GB internal storage, which is expandable via microSD card (up to 128GB). 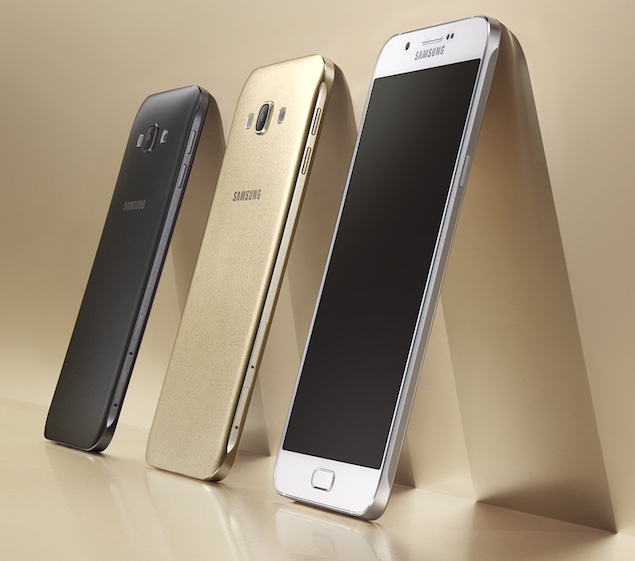 The latest offering by Samsung is backed by a 3050mAh battery, which as per the company gives a standby time (4G TDD LTE + 2G GSM) of up to 304 hours. The Galaxy A8 measures 158x76.8x5.9mm and weighs 10 grams more than its predecessor - 151 grams. The phone supports both Band 3 and Band 40, which means it's compatible with 4G networks being deployed in India right now.

Samsung Galaxy A8 With Fingerprint Sensor Launched at Rs. 32,500
Comment