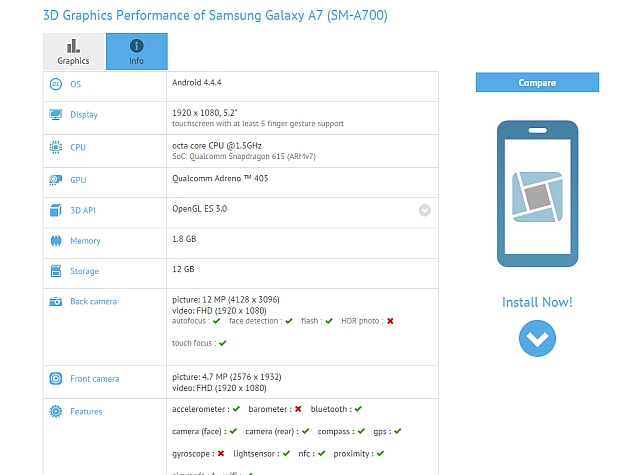 Following the user agent profile listing on the company site last week for the SM-A700FD, the Samsung Galaxy A7 (SM-A700) has again made it to the news with the handset's purported GFXBench test results have appeared online.

The GFXBench results of the Samsung Galaxy A7 (SM-A700) mention key specifications, few of which are in-line with previous leaks. While the full-HD display resolution, Android 4.4.4 KitKat and a 64-bit processor were already rumoured for the device, the result adds other features like a 5.2-inch screen size, octa-core Qualcomm Snapdragon 615 (ARMv7) 64-bit processor clocked at 1.5GHz, 2GB of RAM (listed as 1.8GB), Adreno 405 GPU, OpenGL ES 3.0, 16GB inbuilt storage, a 12-megapixel autofocus rear and 5-megapixel front-facing camera.

The listing of a Qualcomm Snapdragon 615 (ARMv7) processor on GFXBench contradicts both the UA profile listing, as well as Qualcomm's own specs for the Snapdragon 615, which both detail it as an ARMv8 processor.