Samsung Galaxy A70, Galaxy A90 Rumoured to Be the First to Sport New Infinity Display Panels

Samsung Galaxy A70 and Galaxy A90 are said to be the first devices by the company to feature its new Infinity Display panels that were showcased at the Samsung Developer Conference (SDC 2018) last week. The South Korean giant at the developer-focused convention showed off its four new types of Infinity Display panels, including the notch-featuring Infinity-U, Infinity-V, and Infinity-O as well as the notchless New Infinity. It appears that the Galaxy A70 and Galaxy A90 will be the first models to have a display notch since the company has so far managed to keep its Galaxy models from the ongoing trend of mobile devices having a cutout for the selfie camera and frontal sensors. It instead deployed its previous Infinity Display design that has thin bezels on the left and right sides but significant space for the front-facing sensors and earpiece on the top of the screen and a chin at the bottom.

Samsung at the SDC 2018 showcased its three new type of notch display designs in the form of the Infinity-U, Infinity-V, and Infinity-O. While the While the Infinity-U design appears to have a U-shaped display notch, the Infinity-V design will come with a V-shaped notch, and the Infinity-O design will bring a hole to the display panel. It is unclear that which type of design will debut on the rumoured Galaxy A70 and Galaxy A90. However, the company teased the Galaxy A8s with a display hole design for the selfie camera. There will also be a New Infinity design in the future Galaxy models that will bring notchless display experiences. This could be exclusive to the premium Galaxy-series handsets next year.

Ben Geskin, who is popular for visualising rumours and leaks by designing renders, posted an image projecting the new Infinity Display family. The image shows how we could see notch displays on Samsung devices in the coming future. 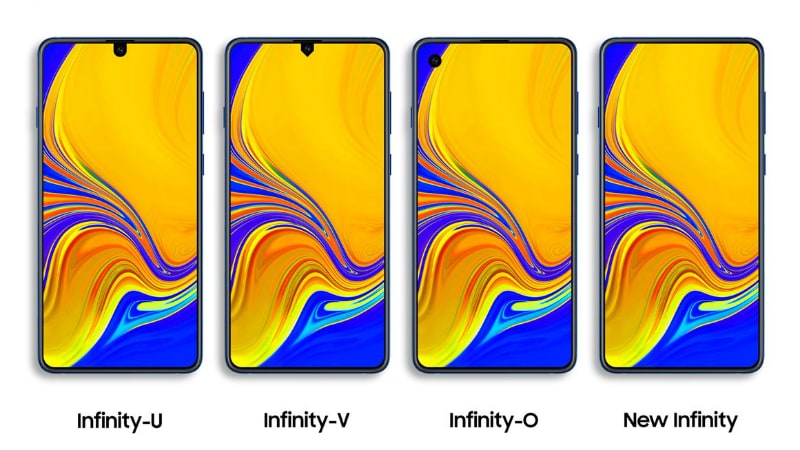 A recent report from South Korea's ETNews highlighted that the Galaxy A family in 2019 will get LCD panel-sporting models. All the existing Galaxy A-series models in the current market notably have an AMOLED display to deliver a comparable experience with vivid colours and deep black levels. But it appears that since the company is reportedly in plans to kill its Galaxy J series, the new decision could help bring new affordable models.

The report also specified that there will be the Galaxy A30, Galaxy A40, Galaxy A70, and Galaxy A80 with AMOLED display panels, while the Galaxy A50 and Galaxy A60 will come with LCD panels. The OLED and LCD models in the new range are said to debut in markets such as Korea, North America, and Europe, while the LCD models will debut only in price-sensitive India and some Southeast Asian markets. The ultimate aim is to bring devices at prices lower than KRW 300,000 (roughly Rs. 19,300).

Samsung is also rumoured to have plans to consolidate its Galaxy J, Galaxy On, and Galaxy C series of models under the Galaxy M lineup. Further, there could be the Galaxy M50 with an AMOLED panel, while the Galaxy M30 and Galaxy M40 will come with LCD panels. Storage variants of a couple of new Galaxy M models have also been leaked.

Further reading: Samsung Galaxy A70, Samsung Galaxy A90, Samsung, Infinity Display
Jagmeet Singh Email Jagmeet Jagmeet Singh writes about consumer technology for Gadgets 360, out of New Delhi. Jagmeet is a senior reporter for Gadgets 360, and has frequently written about apps, computer security, Internet services, and telecom developments. Jagmeet is available on Twitter at @JagmeetS13 or Email at jagmeets@ndtv.com. Please send in your leads and tips. More
Samsung Galaxy S10's Exynos SoC Expected to Be Unveiled on November 14

Samsung Galaxy A70, Galaxy A90 Rumoured to Be the First to Sport New Infinity Display Panels
Comment