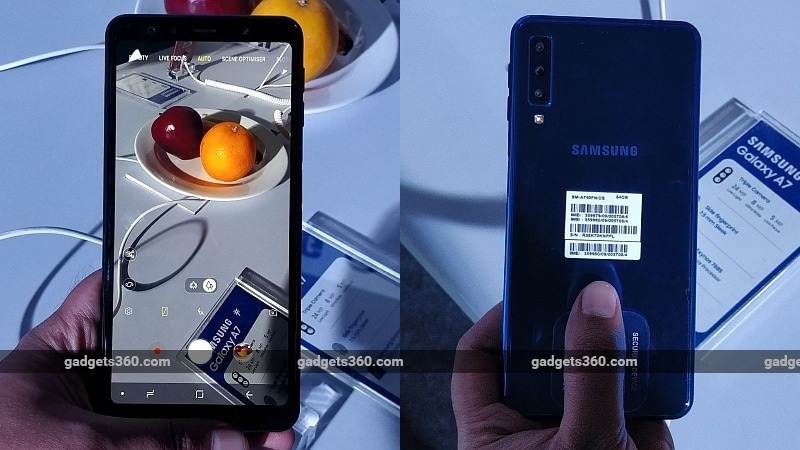 The Samsung Galaxy A7 (2018) is a dual-SIM smartphone that runs Android 8.0 Oreo along with Samsung Experience UX on top. It sports a 6-inch full-HD+ (1080x2220 pixels) Super AMOLED Infinity Display with an 18.5:9 aspect ratio. It features Gorilla Glass 3 protection. The smartphone is powered by an octa-core Samsung Exynos 7885 processor clocked at 2GHz. It comes with 4GB and 6GB RAM options.

In terms of optics, the triple rear camera setup of the Galaxy A7 (2018) bears a 24-megapixel autofocus sensor with f/1.7 aperture, an 8-megapixel ultra wide sensor with f/2.4 aperture, and a 5-megapixel depth sensor with fixed focus and f/2.2 aperture. Additionally, the smartphone comes with a 24-megapixel fixed-focus camera sensor at the front along with an f/2.0 aperture and an LED flash. The selfie camera is equipped with features such as Selfie Focus and Pro Lighting Mode.

The Galaxy A7 (2018) comes with 64GB and 128GB inbuilt storage models, both of which are expandable via microSD card (up to 512GB). Connectivity options in the Galaxy A7 (2018) include 4G VoLTE, dual-band Wi-Fi 802.11ac, Bluetooth v5.0, ANT+, NFC with Samsung Pay support, GPS, GLONASS, Beidou, and a 3.5mm headphone jack. The sensors on board the handset are accelerometer, gyroscope, proximity sensor, RGB light sensor, and a side-mounted fingerprint sensor. The Galaxy A7 (2018) is fuelled by a 3,300mAh battery. In terms of dimensions, the smartphone measures 159.8x76.8x7.5mm. The company is also touting Dolby Atmos audio and AR Emoji features.