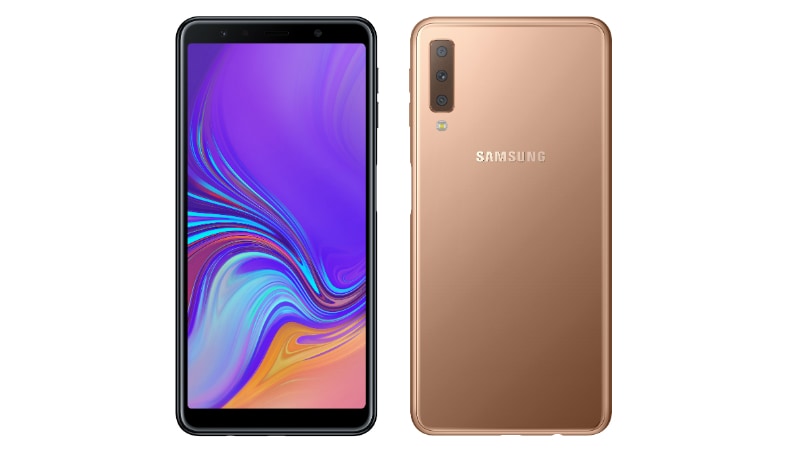 Samsung Galaxy A7 (2018) India launch event has finally kicked off, marking the entry of the first handset with three cameras on the back from the company's stables in the domestic market. The new smartphone comes to the Indian market just days after its global unveiling, and features a depth of field lens, an autofocus lens, and a wide-angle lens. The Samsung Galaxy A7 (2018) India launch was scheduled to start at 12pm IST but was delayed by over 40 minutes. Samsung kicked off the event with a look at its 23-year history in India, rounding up with the new Opera House in Bengaluru that was inaugurated earlier this month. Samsung India Director Sumit Walia then unveiled the Galaxy A7 (2018), talking about how the triple rear camera setup will satisfy the requirements of the millenials who love to click and edit photos on their phones.

The new Samsung Galaxy A7 (2018) also has the AR Emoji function in the selfie camera. Key features talked about on stage include the 6-inch full-HD+ Infinity Display, side-mounted fingerprint sensor, Exynos 7885 SoC, and 3,300mAh battery. The smartphone comes in Blue, Black, and Gold colours. As for the Samsung Galaxy A7 (2018) price in India, the 4GB RAM + 64GB storage variant has been priced at Rs. 23,990, while the 6GB RAM + 128GB storage option costs Rs. 28,990. Both variants support microSD cards up to 512GB for storage expansion. The smartphone will become available to purchase in India via Samsung e-store, Samsung Opera House, and Flipkart on September 27 and September 28. After that it will go on open sale via all channels, including offline. HDFC Bank customers will get Rs. 2,000 cashback on purchasing the handset.

There is no live stream for users to watch the event in real-time. But worry not, as we will be live at the Samsung Galaxy A7 (2018) launch event to bring all the updates to you - all you need to do is to refresh the page every few minutes to get ball-by-ball updates. The Samsung Galaxy A7 (2018) price in India will be the most eagerly anticipated piece of information from the launch event today. Of course, fans will be waiting to find out the launch offers and the release date too.

Moving on to the specifications, the dual-SIM (Nano) Samsung Galaxy A7 (2018) runs Android 8.0 Oreo along with Samsung Experience UX on top and sports a 6-inch full-HD+ (1080x2220 pixels) Super AMOLED Infinity Display along with an 18.5:9 aspect ratio. It is powered by an octa-core SoC clocked at 2GHz, paired with 4GB and 6GB RAM options. The triple rear camera setup of the Galaxy A7 (2018) has a 24-megapixel autofocus sensor with f/1.7 aperture, an 8-megapixel ultra wide sensor with f/2.4 aperture, and a 5-megapixel depth sensor with fixed focus and f/2.2 aperture. For selfies, there is a single 24-megapixel fixed-focus camera sensor at the front along with an f/2.0 aperture and an LED flash.

For storing content, the Galaxy A7 (2018) has 64GB and 128GB of onboard storage options that both are expandable via microSD card (up to 512GB). Connectivity options on the smartphone include 4G VoLTE, dual-band Wi-Fi 802.11ac, Bluetooth v5.0, ANT+, NFC (subject to region) with Samsung Pay support, GPS, GLONASS, Beidou, and a 3.5mm headphone jack. Sensors onboard include an accelerometer, gyroscope, proximity sensor, RGB light sensor, and a side-mounted fingerprint sensor. Besides, the smartphone packs a 3,300mAh battery and measures 159.8x76.8x7.5mm. It will be available in Blue, Black, Gold, and Pink colour options.