Samsung Galaxy A7 (2018) Gets Android Pie-Based One UI Beta: Report

The Samsung Galaxy A7 (2018) seems to be the next product on the list as the company has started the beta programme for it according to reports. Samsung is rolling out the One UI based on Android Pie to users who have enrolled themselves in the beta programme.

This new update will not only update the smartphone to Android Pie but will also bring a completely different UI that should feel refreshing on the older smartphones. The beta build that is currently rolling out to the Galaxy A7 2018 is 1.3GB in size and the February security patch is also bundled with it. 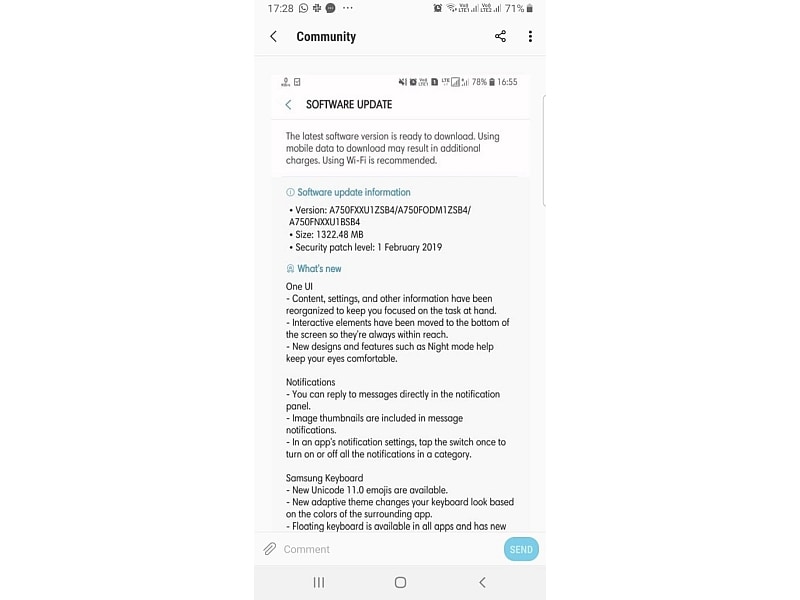 One UI focuses mainly on reachability that interactive elements in the UI have been moved down to the lower half of the screen to make them easy to reach. It also has night mode which cuts out the blue light from the display to make it comfortable on the eyes when using it at night.

The Galaxy A7 (2018) was the first Samsung smartphone with a triple camera setup in the country and was launched at Rs. 23,990. We had recently seen a price cut which slashed the price down to Rs. 18,990. An earlier report also hinted that Samsung is working on an Android Pie update for the Galaxy A7 (2018) which has now reached the beta state. If you have a Galaxy A7 (2018)

If you want to try the beta out, you can go the the Samsung Members app and go to Notices. If you see a banner for Android Pie beta, tap on it to register. You can then try downloading it by going to the Software Update menu.

Further reading: Samsung, Samsung Galaxy A7 2018, OneUI, Android Pie
Aditya Shenoy Email Aditya Aditya Shenoy reviews smartphones, wearables, headphones and speakers for Gadgets 360, out of Mumbai. Aditya is a reviewer for Gadgets 360 and has written extensively about smartphones, software updates, and upcoming devices. Aditya is available on Twitter at @adishenoy, and you can mail him at adityashenoy@ndtv.com, so please send in your leads and tips. More
Google Maps for iOS Users Can Now 'Follow' Their Favourite Places
Samsung Galaxy S10 Will Have Gear VR Support, Bixby Button Can Be Remapped