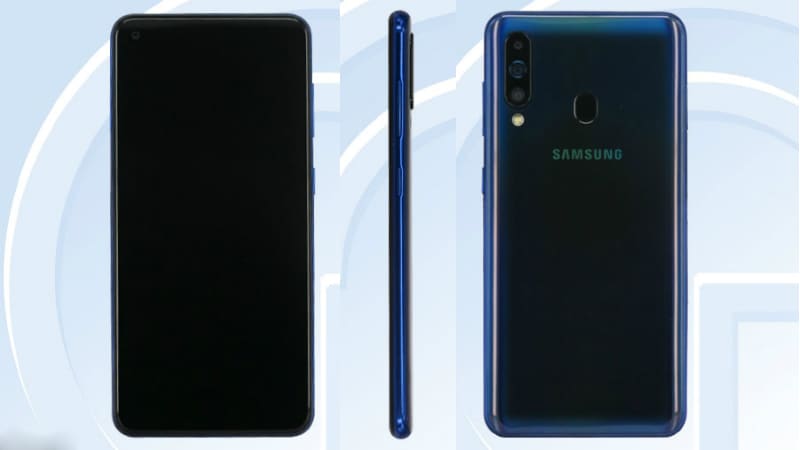 Samsung Galaxy A60 specifications have now been revealed in their entirety on TENAA. The new development comes just after the images and some basic specifications, such as the battery capacity and dimensions, of the Galaxy A60 surfaced on the Chinese certification site. The updated TENAA listing shows that the handset sports a 32-megapixel selfie camera and come with a 19.5:9 aspect ratio. It also highlights the two different RAM variants of the Galaxy A60 that is expected to launch in the global markets on April 10.

According to the updated TENAA listing that is detailing the Samsung Galaxy A60 with model number SM-A6060, the handset has a 6.3-inch full-HD+ (1080x2340 pixels) TFT display along with a 19.5:9 aspect ratio. The images available on TENAA divulge that the phone has a hole-punch display that Samsung calls Infinity-O Display. The updated listing also confirms a "2GHz/ 1.7GHz" processor that could be a new Exynos SoC with varied clock speeds.

The updated listing on the TENAA site shows that there are two storage options -- 64GB and 128GB -- in addition to 6GB and 8GB RAM options. Both are expandable via microSD card (up to 512GB). Also, sensors on the smartphone include an accelerometer, gravity sensor, and a fingerprint sensor.

The updated TENAA listing specifies that the Samsung phone runs Android 9.0 Pie and comes in multiple colour options, including Black, Blue, and Orange. Furthermore, there is a mentioning particularly about the 3,410mAh battery. This is something that was confirmed earlier. Moreover, the smartphone measures 155.2x73.9x7.9mm and weighs 162 grams.

It is speculated that Samsung would unveil the Galaxy A60 formally at its April 10 event. The event is taking place in Bangkok, Milan, and Sao Paulo.