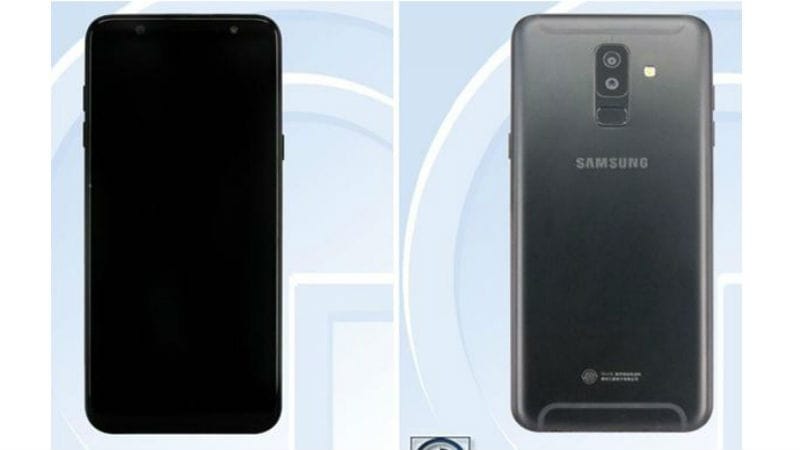 Samsung Galaxy A6 and Galaxy A6+ are said to be nearing their imminent launch, with information coming from all corners. While the Galaxy A6 was just spotted in a demo video that showcased the smartphone in all its glory, its bigger sibling Galaxy A6+ has now been spotted on a Chinese certification site. Many details of the handset have been revealed in the listing, confirming several previous reports that had tipped features of the upcoming Samsung smartphone.

As per a report in MyDrivers, images, as well as specifications of a Samsung smartphone with model number SM-A6050, have surfaced on TENAA. In the images of an alleged Galaxy A6+, the design looks familiar, as similar features were previously seen in leaked renders of the smartphone. The handset appears to have a metal body with some newly designed bumpers. Also, Galaxy A6+ can be seen in a Black colour variant, in addition to the Gold and Blue models reported earlier. Additionally, the TENAA images confirm the presence of dual a rear cameras setup as well as fingerprint sensor mounted on the back, similar to the Galaxy S9+.

We can expect more leaks to surface as we approach the launch date of Samsung Galaxy A6 and Galaxy A6+ in these markets across the globe. However, there has been no official word on the smartphones from the Korean giant, meaning we should take the rumours with a pinch of salt.

To recall the specifications that have been revealed so far, the Galaxy A6+ is expected to sport to be powered by a Snapdragon 450 SoC paired with 4GB RAM, and come with 32GB inbuilt storage. Earlier this month, both variants of the smartphone were spotted on the company's official site. Additionally, another leak had outed the alleged specifications of the Galaxy A6 duo as well. Also, the Galaxy A6+ is expected to be the only variant that will sport a dual camera setup at the back.

The Samsung Galaxy A6 duo could include Infinity Displays in an 18.5:9 aspect ratio. The latest images do not reveal too many details about the hardware, but reports have claimed that it is powered by an octa-core Exynos 7870 SoC coupled with 3GB RAM, and features 32GB inbuilt storage.