Samsung’s Galaxy A51 is said to sport a hole-punch display, as per previous leaks. Galaxy A51 is also said to have a quad camera setup.

Samsung Galaxy A51 is anticipated to be amongst the first of the new Galaxy A-series.

There have been numerous rumours and leaks that indicate South Korean giant Samsung is currently working on a Galaxy A51 smartphone. This smartphone is said to be the successor of the Galaxy A50 and the Galaxy A50s and is expected to help Samsung establish its position in the mid-range segment. We have already seen a few leaks in the past which have revealed different aspects of the upcoming smartphone. Now, the Samsung Galaxy A51 has been recently spotted on Bluetooth certification websites which hint that a launch is imminent.

The Samsung Galaxy A51 got its Bluetooth certification recently via LaunchStudio, first spotted by Sammobile. The Galaxy A51 could be the first smartphone to launch as a part of the A series in 2020. We have also seen support pages for the Samsung Galaxy A51 show up, hinting that the launch will happen in the near future. The device has also cleared Wi-Fi certification that tipped that the smartphone will be running Android 10 at launch. 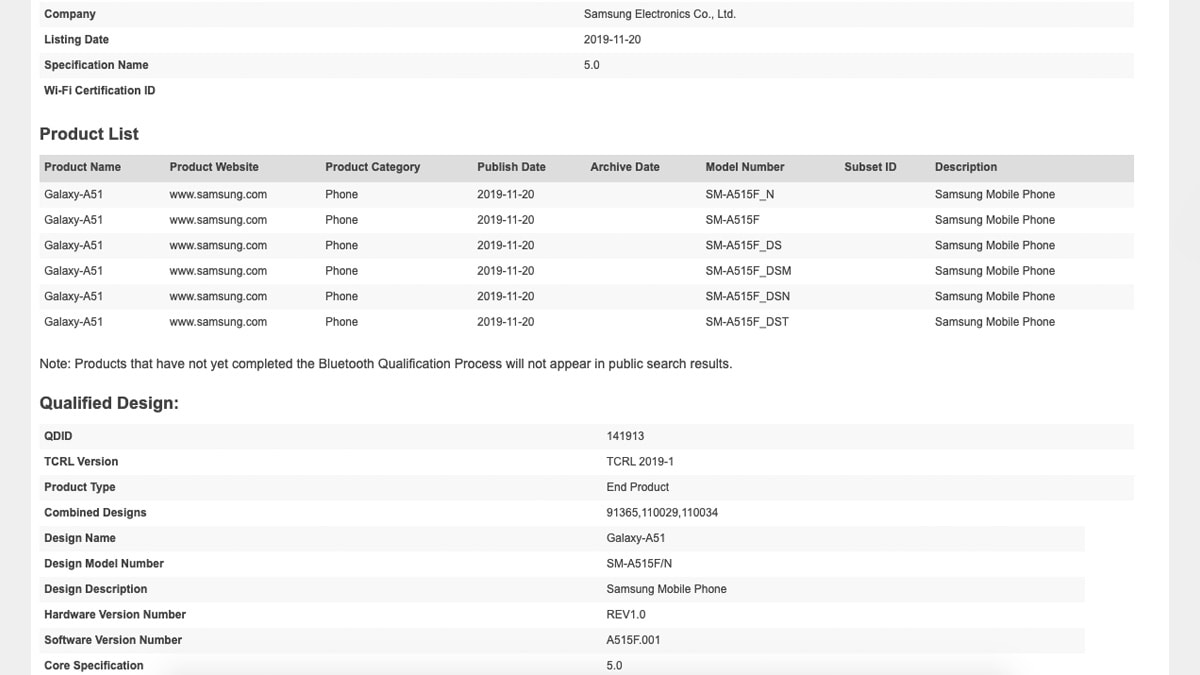 In the past, we have seen leaked renders from case manufacturers that showcase the quad camera setup at the back along with the rectangular camera module like the one seen on the Galaxy M30s. The Samsung Galaxy A51 is tipped to feature a 48-megapixel primary camera, a 12-megapixel wide-angle camera, a 12-megapixel telephoto camera with 2x optical zoom, and a 5-megapixel depth sensor. It is said to sport a hole-punch display at the centre of the display just like the Samsung Galaxy Note 10. And rumours also point to a 32-megapixel selfie shooter. The smartphone will also sport an in-display fingerprint scanner.