The software update for the Samsung Galaxy A50 is reportedly rolling out in the Philippines at the initial stage.

Samsung Galaxy A50 has started receiving a new software update that improves its touchscreen performance, according to a report. The latest update is also said to improve moisture detection algorithm to help users save their Galaxy A50 from malfunctioning due to moisture around its USB port. Samsung has released the new software update just weeks after pushing the August Android security patch to the Galaxy A50. The last update also included improvements towards the fingerprint recognition performance and battery charging algorithm of the smartphone.

The latest software update for the Samsung Galaxy A50 brings firmware version A505GNDXU3ASH4 and is sized at 210.70MB, reports TizenHelp. One of the major changes that the update brings to the smartphone is the improved performance of its touchscreen.

As per the changelog available on the screenshot shared by the source, Samsung has improved the moisture detection algorithm through the update. The algorithm is designed to monitor the USB port to restrict charging on the smartphone if a connector with moisture is inserted.

Further, the software update apparently improves the stability of Samsung's Knox Guard and optimises the security of the smartphone. There are also various stability improvements and bug fixes, but there aren't any changes to the Android security patch that's still the August one. 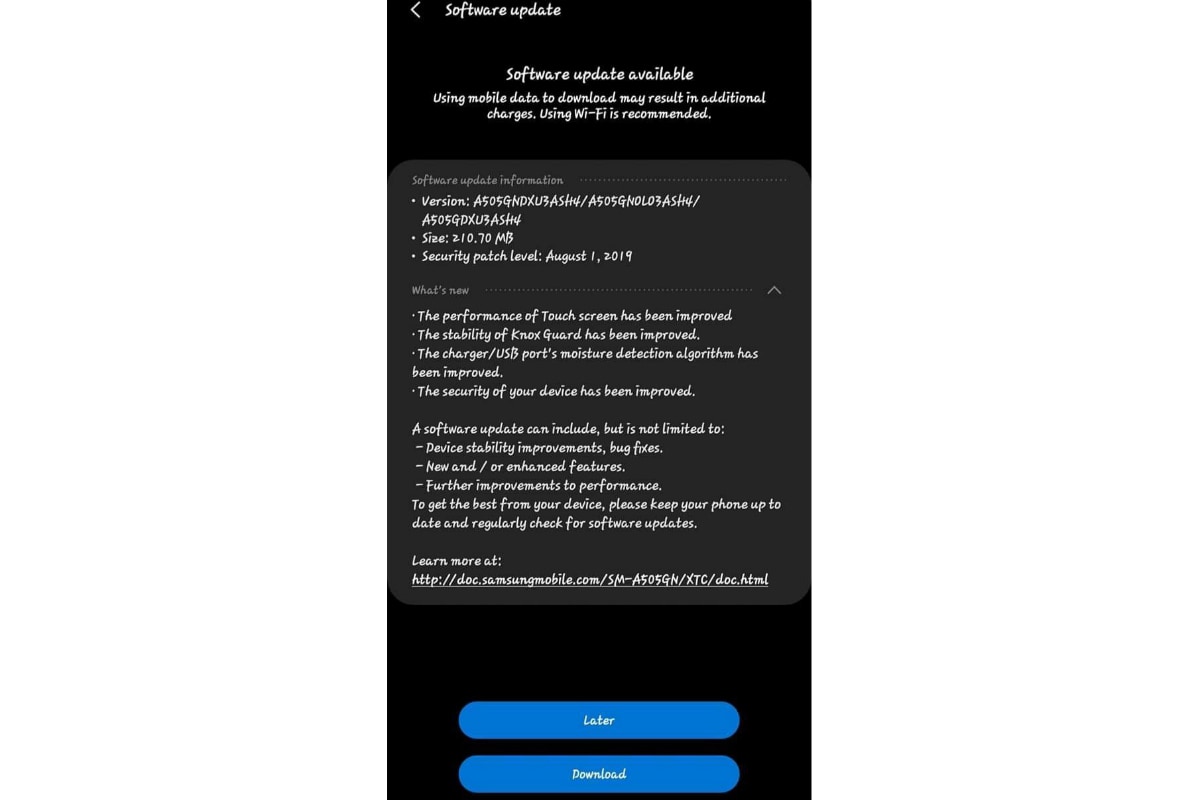 The latest software update for the Samsung Galaxy A50 is reportedly rolling out in the Philippines at the initial stage. Nevertheless, it is expected to reach other markets including India in the coming days.

Last month, Samsung released the firmware version A505FDDU2ASH3 that brought the August Android security patch and improvements to the fingerprint sensor. The update also preinstalled the Snapchat app on the Galaxy A50.

Further reading: Samsung Galaxy A50, Samsung
Jagmeet Singh Email Jagmeet Jagmeet Singh writes about consumer technology for Gadgets 360, out of New Delhi. Jagmeet is a senior reporter for Gadgets 360, and has frequently written about apps, computer security, Internet services, and telecom developments. Jagmeet is available on Twitter at @JagmeetS13 or Email at jagmeets@ndtv.com. Please send in your leads and tips. More
Realme 5 Pro to Go on Sale Today at 12 Noon via Flipkart.com, Realme.com: Price in India, Sale Offers, Specifications