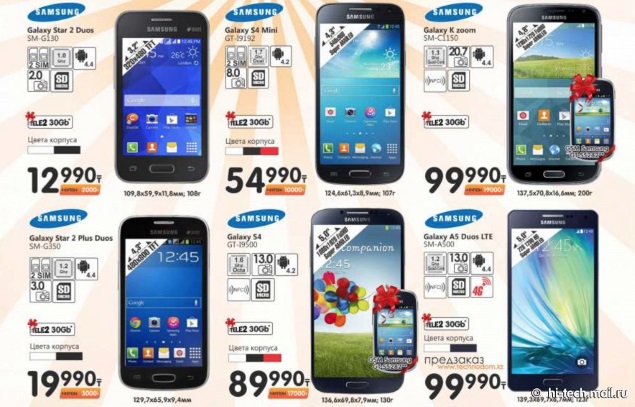 A Kazakhstan-based retailer, Technodom, appears to have spilled Samsung's beans, listing the yet-to-be-announced Galaxy A5 Duos LTE along with price.

Some of the other details listed by the retailer include a 5-inch Super Amoled display with a resolution of 720x1280 pixels; a 1.2GHz quad-core Qualcomm Snapdragon 400 processor; 1GB of RAM; microSD card slot support; NFC and 4G LTE support; a 13-megapixel rear camera, and a 5-megapixel front camera. The retailer also tips that the smartphone will run Android 4.4.4 KitKat out-of-the-box.

Interestingly, most of the specifications listed by the Kazakhstan retailer are in-line with previous leaks. The battery capacity for the Galaxy A5 earlier tipped was 2330mAh.

A recent report claimed that the anticipated Samsung Galaxy A5, part of the rumoured upcoming Galaxy A series of smartphones, was expected to release 'as soon as November'.

Samsung has for a while been rumoured to be working on the new Galaxy A-series of smartphones, a series expected to include the Samsung Galaxy A3 (SM-A300), Samsung Galaxy A5 (SM-A500), and Samsung Galaxy A7 (SM-A700) - phones that have leaked on multiple occasions in the recent months.