It looks like Samsung's plan to flood the market with nine new Galaxy A-Series smartphones is getting closer to reality. A new benchmark leak has outed the specs what would very likely be the upcoming Samsung Galaxy A10, which should be the most affordable device in this year's Galaxy A-Series. According to the listing the Samsung Galaxy A10 comes with Android 9.0 Pie out-of-the-box, has 2GB of RAM, and what could be Samsung's Exynos 7885 SoC. With the new Galaxy A-Series, Samsung aims to directly take on the Chinese competition in the budget to mid-range segment.

The new Geekbench listing reveals what could be the specifications for a Samsung phone with model number SM-A105F, which is likely to be the 2019 edition of Samsung Galaxy A10. The listed specs indicate that this could be the company's entry-level phone. Though the listing indicates that it's running an octa-core Exynos 7885 SoC, the clock speed mentioned is lower than usual. According to a report by SamMobile, this could mean that the phone may be running the recently launched Exynos 7904 instead. 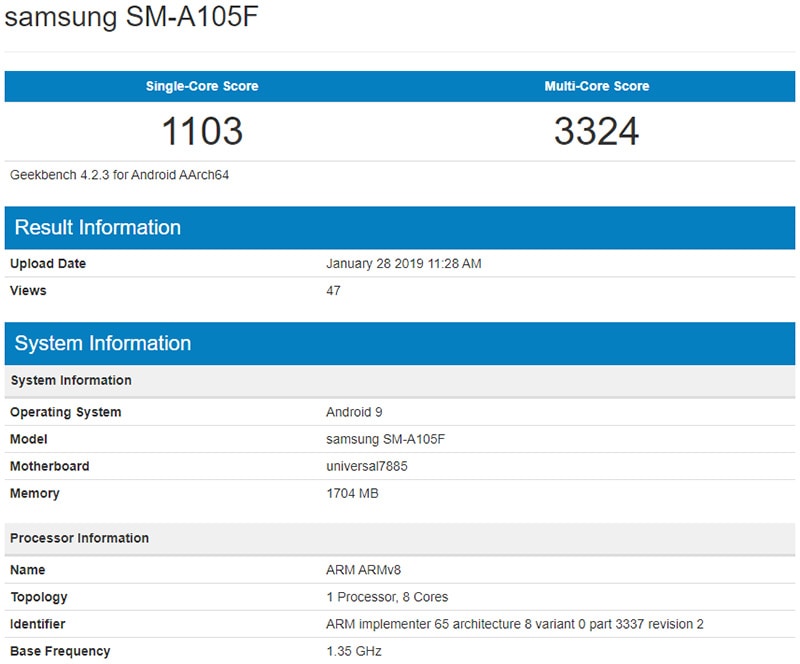 The leak also points out that the phone comes with 2GB RAM, which again, could only be acceptable in the entry-level segment. The results are based on the phone running Android 9 Pie, similar to the earlier Samsung Galaxy A30 leak.

This aligns perfectly with an earlier report about Samsung planning to launch nine phones from the mid-range series in the first half of 2019 itself. The phones are said to feature model numbers SM-A105, SM-A202, SM-A205, SM-A260, SM-A305, SM-A405, SM-A505, SM-A705 and SM-A905. The new launches will be mainly aimed at Asian markets, which are likely to include India and China, where the company is facing high competition from Chinese manufacturers.

That said, we're likely to see the launch of Samsung's new flagship, the Samsung Galaxy S10, ahead of MWC 2019 before the new Galaxy A-Series goes official. Samsung has scheduled its Galaxy Unpacked event for February 20.