Alongside getting back on track with the Galaxy M-Series, Samsung is all set to launch the Galaxy A-Series of smartphones in India to take on the competition. The South Korean company was previously reported to have plans to bring its new Galaxy A-Series models to the country starting March. But now, a notice on the Samsung Members app has revealed that the Samsung Galaxy A-Series is all set to launch in India on February 28. An image apparently showing the retail boxes of the Galaxy A10, Galaxy A30, and Galaxy A50 models has also been leaked on Twitter.

The Samsung Members app, which generally provides notifications about new software updates and latest offers, has now featured a notice that confirms the launch date of the Galaxy A-Series in India. "We're hosting a grand event to launch the brand new Galaxy A-Series - a phone for all," the company wrote in the notice posted to the users of the Members app.

Interesting, the notice on the Members app suggests that Samsung will host events in Kolkata, Hyderabad, and Mumbai to create some hype around the new Galaxy A models. This looks similar to how companies such as Asus and Xiaomi have hosted their fan events in the past. Meanwhile, the company is asking users of the Members app to fill up their details, such as name, mobile number, and email ID to receive the formal invitation for the launch event in their cities. 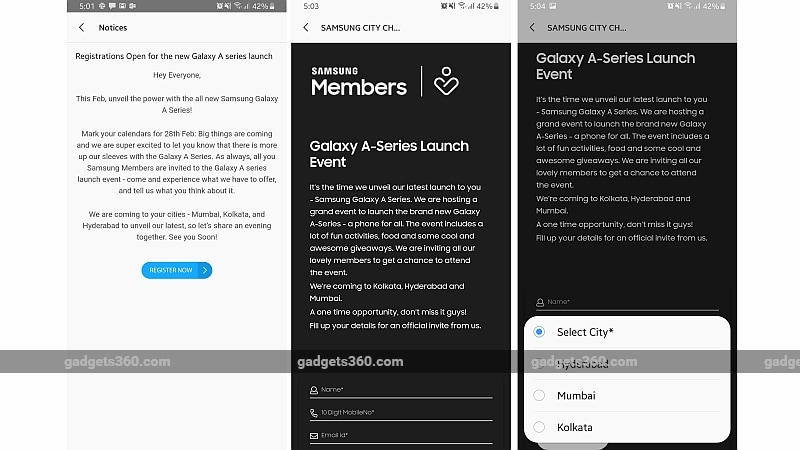 SamMobile first reported the revelation of the Galaxy A-Series launch date. Gadgets 360 was able to separately verify the presence of the notice specifying the launch scheduled. Samsung India didn't respond to an email inquiry concerning the upcoming launch.

Separately, tipster Ishan Aggarwal on Wednesday leaked an image apparently showing the retail boxes of the Samsung Galaxy A10, Galaxy A30, and Galaxy A50 models. All three models appear to have thin bezel displays and multiple rear camera modules. 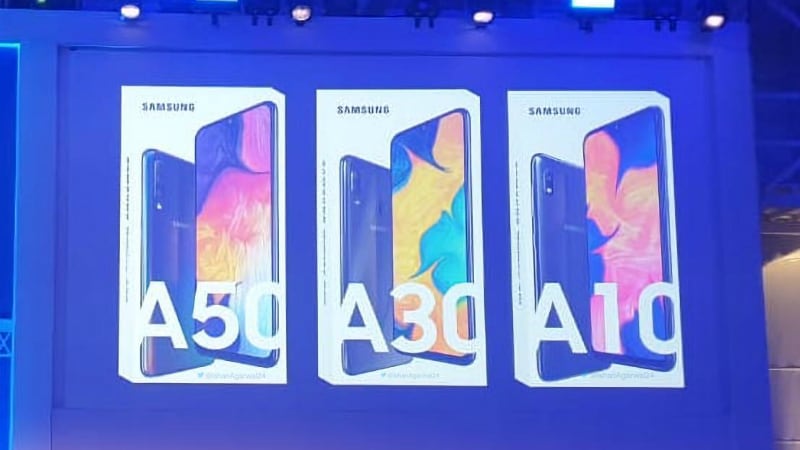 The official launch date of the new Galaxy A-Series models is just a day after Samsung is set to unveil the Galaxy M30 in India. As we mentioned, Samsung is reportedly planning to unveil one new smartphone from the Galaxy A series every month starting from March, through June. The new range could take on the competitive models by Asus, Oppo, Vivo, and Xiaomi.

If we look at the past rumours, Samsung may have plans to bring the Galaxy A10, Galaxy A30, and Galaxy A50 initially. The new Galaxy A series models are likely to have specifications similar to that of the Galaxy M10, Galaxy M20, and the upcoming Galaxy M30. All new models could have Infinity-V and Infinity-U Display panels and run Android Pie out-of-the-box. Further, Samsung could offer as high as a 4,000mAh battery.

A user manual of the Galaxy A50 also last week emerged online -- detailing its key specifications. The handset appears to have an in-display fingerprint sensor and come with dual-SIM support. Also, there could be a triple rear camera setup along with OIS support.

It is worth pointing out that it's not just Samsung that is launching its series of new phones in India on February 28. Xiaomi is also set to launch the Redmi Note 7, and may also be the Redmi Note 7 Pro, at a press event on the same date. It would be interesting to see how the South Korean company is planning to go head-to-head with the Chinese giant.