After much anticipation and the emergence of a bunch of patent filings, Samsung at the Samsung Developer Conference (SDC 2018) in San Francisco, California formally unveiled a foldable smartphone form factor that is based on an Infinity Flex Display. The South Korean giant at its annual developer conference also unveiled its all-new interface design called One UI that is specifically designed to make the experience more natural and comfortable for one-handed use than the existing Samsung Experience UX. The new interface also comes as a companion to the Infinity Flex Display to power Samsung's first-generation foldable smartphones. The company has so far managed to abandon the traditional display notch design to favour its "Infinity Display" technology. However, at the developer conference, it revealed the arrival of notches by announcing three notch designs, including the Infinity-U, Infinity-V, and Infinity-O. The Galaxy smartphone maker also announced that it is opening up Bixby virtual assistant to developers in a bid to expand its presence over time - taking on Google's Assistant, Apple's Siri, Amazon's Alexa, and Microsoft's Cortana.

Among other key announcements, Samsung at the SDC 2018 unveiled a foldable smartphone form factor that has been in development in collaboration with Google. The form factor is based on the Infinity Flex Display and is aimed to offer users with the ability to transform a smartphone into a tablet. The form factor is touted to include a "cover display" that will essentially cover the internal, foldable display that could of as much as 7.3-inch in size. Apps featured on the cover display moves to the larger display once the hardware unfolds. Samsung also claimed that its One UI will enable the device to simultaneously open up to three active apps on the larger display.

"With app continuity, the app you are using when the device is closed is right there waiting for you," explained Justin Denison, SVP of Mobile Product Marketing, Samsung, during the opening keynote at the SDC 2018 on Wednesday. "When it's open, it's an intuitive continuous experience between the cover display and the main display. In addition, we're giving people the ability to run up to three apps simultaneously - no swapping between apps, no closing one app to get to another - just multitasking as it was meant to be. We call it Multi-Active Window." 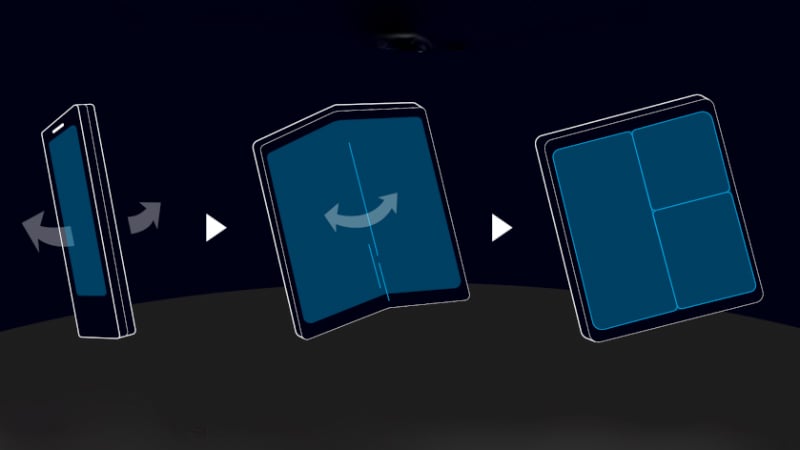 Since a conventional glass panel isn't pliable, Samsung has built a new material for the cover window that is claimed to be "flexible and durable" for the new form factor. There is also a unique adhesive that helps enhance the elasticity of the display. Technically, under the cover window, there is a shock-absorbent film, ultra-thin polariser, flexible layer, and a flexible backplane. The polariser in the new setup is also much thinner than what's available on an existing AMOLED display to enable flexibility.

Samsung didn't reveal any concrete details around when we can see a final device based on the newly designed foldable form factor. It showcased a prototype in a "black box" that appeared to enable the folding action using a built-in motor. Google on the other hand, at its Android Dev Summit, let slip that Samsung's foldable smartphone will be launched early next year. However, in its Android Developers blog post, Google had a slightly different timeline to share, saying, "Expect to see Foldables coming from several Android manufacturers, including one Samsung previewed today and plans to offer next year."

Alongside the foldable smartphone development, Samsung at the SDC 2018 announced that it is expanding its Infinity Display family by adding the Infinity-U, Infinity-V, and Infinity-O designs. While the Infinity-U design appears to have a U-shaped display notch, the Infinity-V design will come with a V-shaped notch, and the Infinity-O design will bring a hole to the display panel. Samsung already teased the Galaxy A8s with a display hole design for the selfie camera. It looks like some other Galaxy-series models could come with a display hole in the future to offer high screen-to-body ratio. Android Police points out that the company will also have a "New Infinity" design that will be specific to notch-less smartphones.

Samsung could use its One UI across all the new Infinity Display designs to offer a unified experience on all Galaxy models. The new interface is claimed to make it easy for users to access tasks using one-handed gestures. The One UI will be available to developers in select markets later this month via Samsung's official beta testing programme. It is expected to head to the Galaxy S9 and Galaxy Note 9 models at the initial stage through a software update next year. 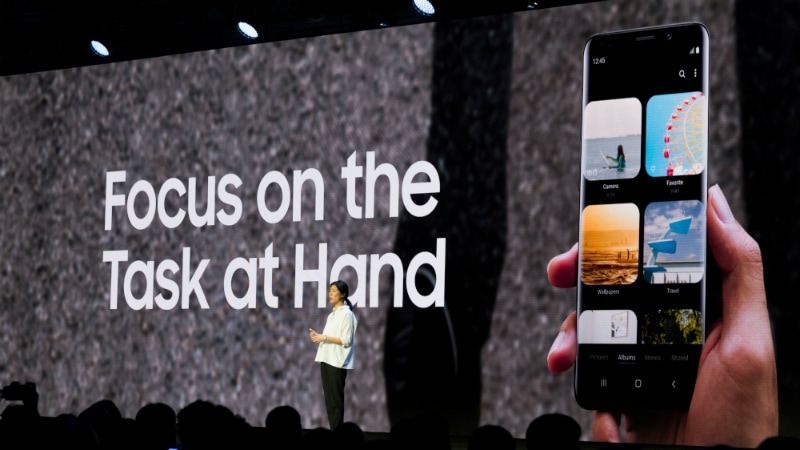 Aside from the new display developments, Samsung at the SDC 2018 announced that it is opening up Bixby for third-party developers. The company highlighted a dedicated Bixby Developer Studio that will serve developers an integrated development environment (IDE) to let them create Bixby Capsules - the capabilities to add native functionalities and services to the Bixby voice assistant. Also, there will be a Bixby Developer Centre to help developers build new experiences. A Bixby Marketplace would additionally be available to host Bixby Capsules.

Samsung is essentially aiming to take on Google Assistant, Apple's Siri, Amazon Alexa, and Microsoft's Cortana by expanding Bixby. It is also set to bring Bixby Capsules to devices other than smartphones, including smart TVs, speakers, and home appliances. The company is also updating the voice assistant to other languages - British English, French, German, Italian, and Spanish.