Samsung Galaxy F41 Geekbench listing hints at Exynos 9611 SoC and 6GB of RAM under the hood.

Samsung Galaxy F41 schematics have reportedly been leaked online. These schematics of the alleged first smartphone in the rumoured Galaxy F series have been posted by a tipster on Twitter. The images show the phone sporting a waterdrop-style notch and a triple rear camera setup. Furthermore, a phone has also been spotted on Geekbench with model number SM-F415F. It is being speculated that this model number belongs to the Galaxy F41. The listing suggests that the smartphone may be powered by Exynos 9611 SoC, paired with 6GB of RAM.

The schematics of the alleged Samsung Galaxy F41 have been shared by known tipster Ishan Agarwal. Agarwal claims that the rumoured smartphone may have SM-F415F model number and Samsung will use “Full On!” tagline for Indian market. The tipster also claims that the phone could have an AMOLED display. In a previous tweet, Agarwal had said that the phone would be available in two storage options and three colour options – Blue, Black, and Green.

First phone of Galaxy F Series & tagline seems to be 'Full On!' for Indian market.

At the front, the phone is seen sporting a waterdrop-style notch. The left edge of the smartphone sports a SIM card slot, and on the right side are volume rockers and the power key. The bottom edge features a speaker, a USB Type C port, and a 3.5mm audio jack. On the back, the alleged Samsung Galaxy F41 is seen sporting a triple camera setup with flash placed in a rectangular module. There is also a rear-mounted fingerprint scanner.

In another development, the rumoured smartphone has been spotted on Geekbench. The listing shows a phone with a model number SM-F415F – the same as mentioned by Agarwal – running on Android 10. The listing reveals that the phone is powered by Exynos 9611 SoC paired with 6GB of RAM. 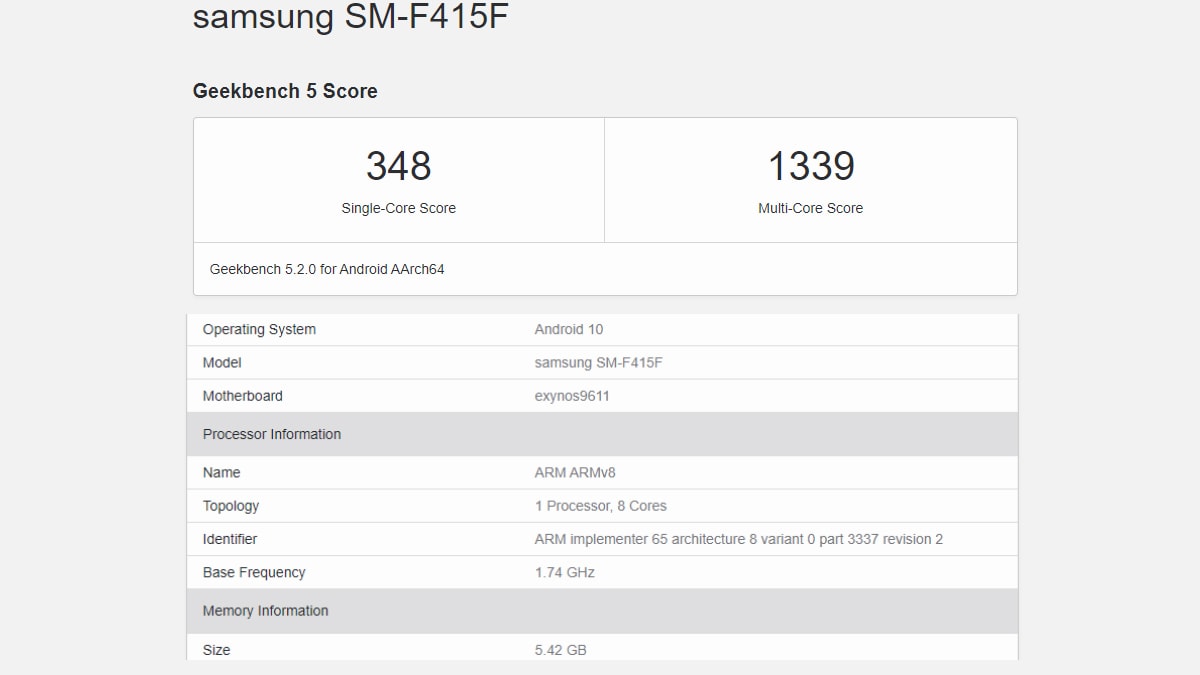 The alleged Samsung Galaxy F41 may be powered by Exynos 9611 SoC paired with 6GB of RAM
Photo Credit: Geekbench

The schematics and the key hardware look similar to various Galaxy M-series smartphones, particularly the Galaxy M31. According to a report by Gizmochina, the alleged Galaxy F41 could be a rebadged version of the Galaxy M31 with improved cameras.

Recently, a report claimed that with the Galaxy F series, Samsung would be expanding its online footprint in India. It is claimed that the phones belonging to this series will be priced between Rs. 15,000 and Rs. 20,000, and will reportedly be camera-centric handsets, and may be launched in India next month.