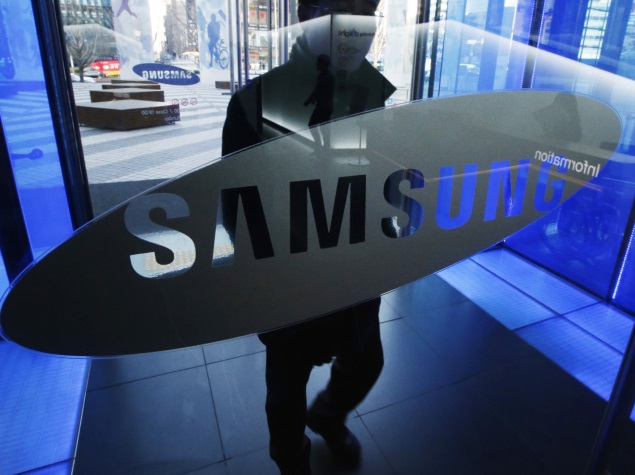 Samsung Electronics Co Ltd on Thursday said its fourth-quarter profit likely fell 37.4 percent, confirming expectations for its first year of profit decline since 2011 as it struggles to retain its crown as global smartphone leader.

The South Korean tech giant lost market share for three consecutive quarters up to July-September, and analysts say the trend likely continued in the October-December period thanks to competition from Apple Inc's new iPhones and cheaper Chinese rivals like Xiaomi Inc.

The outlook means Samsung's 2014 profit will probably be 25 trillion KRW, the weakest in three years, although it marks a rebound from the third-quarter's 4.1 trillion KRW profit which was the firm's lowest quarterly result in more than three years.

Samsung shares were trading 1 percent higher as of 0110 GMT, in line with the broader market, on hopes that quarterly profits have bottomed.

"There were concerns about the mobile division but it looks like the won's recent weakness against the dollar and the Galaxy Note 4 (Review | Pictures) impact helped," HMC Investment analyst Greg Roh said, referring to solid sales of Samsung's latest flagship phone.

"I expect profits to continue improving through at least the second quarter of 2015."

Several analysts tipped the semiconductor division to have earned more than the cash cow mobile business in October-December, buoyed by healthy demand for memory chips from personal computers and smartphones.

The company did not provide a breakdown of its earnings figures in Thursday's outlook, but a person with direct knowledge of the matter told Reuters that components sales picked up across the board, with healthy demand for memory chips and higher liquid crystal display panel prices.

The mobile division's contribution to Samsung's profit has slipped from about 68 percent at its peak in 2013 to about 44 percent in the third quarter, as its high-end offerings lost out to Apple's iPhones. Meanwhile buyers in booming emerging markets like China have opted for cheaper devices rather than Samsung's flagship Galaxy series.

The mobile division's fourth-quarter profit improved slightly from the previous quarter due to a pickup in sales of premium products like the Galaxy Note 4 and lower marketing costs, the person with knowledge of the matter said, requesting anonymity because they were not authorised to speak publicly. But overall smartphone shipments fell, the person added.

Analysts say the company's new focus on mid-to-low tier smartphones will squeeze margins and cap profits, offsetting the benefits of the expected increase in sales.

The median forecast from a Thomson Reuters I/B/E/S survey of 52 analysts tips a 23.8 trillion KRW profit for 2015, which would mean a second straight annual decline if Thursday's profit guidance is confirmed.

Samsung is talking up its Internet of things-related businesses such as the smart home as the next big thing, while launching new quantum dot televisions and metal-body smartphones to boost earnings. But investors do not expect a profit surge from Samsung in the near term.

"What Samsung needs to show under the new regime of Vice Chairman Jay Y. Lee is stabilisation, and that includes earnings."