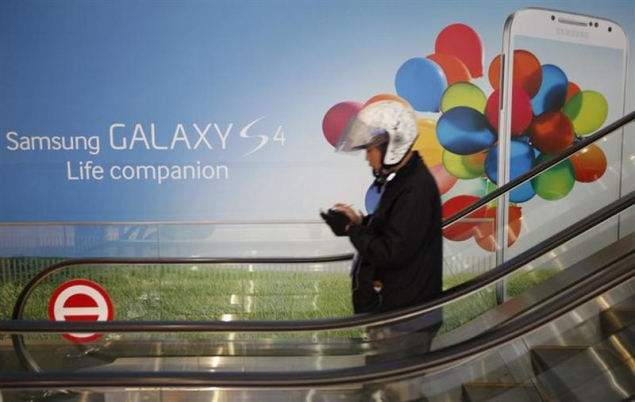 Samsung Electronics Co Ltd reported on Friday its sixth straight quarter of profit growth ahead of the debut of its latest Galaxy smartphone, the South Korean IT giant's biggest assault on rival Apple Inc yet.

By launching the Galaxy S4 in the United States on Saturday, Samsung is taking aim at Apple's home market at a time when the iPhone maker appears to have hit a snag. Earlier this week, Apple reported its first profit decline in more than a decade and indicated no major product releases until the fall.

Samsung is widely expected to resume posting record quarterly profits, after a hiatus in January-March, as the S4 is dispatched to 327 mobile carriers in 155 countries.

This week, Samsung has kicked off a massive advertising campaign for the S4 and set up mini stores at Best Buy locations to promote the smartphone. Initial orders have surprised on the upside, with the firm expecting a short-term supply crunch.

Early success of the S4 is crucial in determining the extent of the expected second-quarter record earnings for a company that gets more than 70 percent of its overall profit from mobile devices.

The new S4, which sports a host of software-enabled features, is seen as stealing a head-start on what's widely expected to be an upgraded iPhone later this year. But the Galaxy phone has drawn mixed reviews so far.

Profit from Samsung's mobile division jumped 56 percent to a record 6.51 trillion won in the first quarter, accounting for nearly three quarters of the firm's entire profit, the company said on Friday, before the stock market open.

Samsung, which doesn't provide smartphone sales figures, likely sold 68-70 million smartphones in the quarter ended March, up from 63 million in the previous quarter, according to five analysts.

By contrast, second-ranked Apple said on Tuesday it shipped 37.4 million iPhones in the March quarter, up from 35.1 million a year ago, but down sharply from 47.8 million in the previous quarter.

Samsung's first-quarter overall operating profit increased 54 percent from a year ago to 8.8 trillion won, broadly in line with its earlier estimate and almost on par with the fourth-quarter's record of 8.84 trillion won.

Shares in Samsung, valued at around $215 billion, have risen 2 percent in the past three months, beating a 21 percent decline in Apple and a 1 percent drop in the wider market.