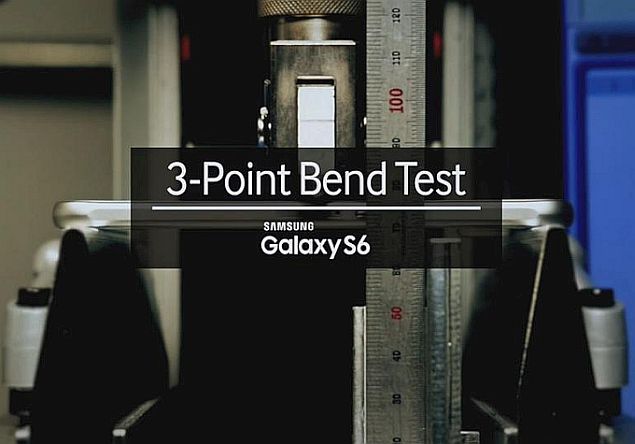 The video shows both the Galaxy S6 and Galaxy S6 Edge can handle pressure of up to 79lbf (pound force, which translates to 35.8 kgf or kilogram force) and even shows that both the panels (front and rear) were subjected to the test.

The move is a way to refute the video by SquareTrade, an extended warranty service provider for consumer electronics, that started making rounds of the Internet last week showing the Galaxy S6 Edge could bend as easily as the iPhone 6 Plus, and that it was more likely to break compared to the Apple offering. SquareTrade had also put the HTC One M9 through a bend test.

Samsung Tomorrow in a tweet said, "When you #bendtest, it is important that you check both front AND back GalaxyS6edge." The company also responded to smartphone durability test result conducted by SquareTrade in a detailed blog where the company stressed that the test assumed a specific pressure condition of 110lbf (49.9kgf), which it claimed "rarely occurs under normal circumstances." It instead said the normal force generated by a person sits on a phone is 66lbf (29.3kgf), and that both the Galaxy S6 and Galaxy S6 Edge were not bendable under 79lbf (35.8 kgf) - which the company says is the amount of force required to "snap a bundle of five pencils at once."

"Even though both front and back sides are exposed under the same level of pressure in normal circumstances, this test does not show the strength of the back side," Samsung added on its blog.

Considering SquareTrade conducted bend test on just one side, Samsung claims that it may "mislead consumers about the entire durability of smartphone."

"For this reason being, Samsung will officially deliver our statement to SquareTrade and ask them to conduct the stress test again which targets both front and back sides, and open the test result to the public," it added.

Of course, all this hearkens back to the famous 'bendgate' issue of Apple's iPhone 6 Plus, which started when users started complaining that the phone was bending in their pockets while sitting. Soon after YouTube videos thrived, showing other flagships put under similar bend tests to see whether they will bend similar to iPhone 6 Plus. At that point, Samsung and numerous other manufacturers took pot shots at Apple with viral memes. Apple later defended the build quality and testing method of both the iPhone 6 and iPhone 6 Plus, taking media on a tour of its testing facility. The similarity of Samsung showing the world its own bend tests when a similar 'bendgate' controversy arose for its own smartphone can not be overstated.