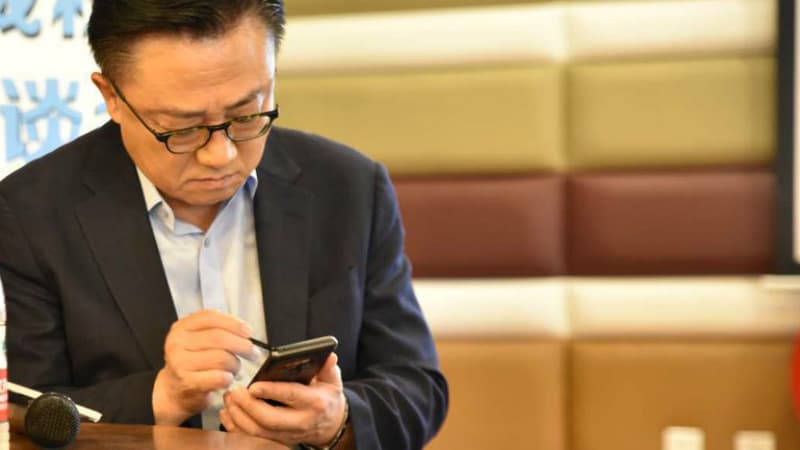 Until now, Samsung Galaxy Note 9 had been a part of various leaks. The leaks majorly highlighted the design and key features of the next-generation Galaxy Note model that is set to debut on August 9. But now - weeks ahead of its formal launch, Samsung Mobile chief DJ Koh has been spotted using the upcoming smartphone in public. Koh was spotted with what appears to be the Galaxy Note 9 at a media briefing. An image from the briefing shows us a glimpse of the handset that is expected to have an upgraded dual rear camera setup and an enhanced S Pen.

As spotted by folks at SamMobile, the back of the alleged Galaxy Note 9 handset that surfaced at Koh's briefing on Monday showed a tweaked dual camera setup that isn't placed vertically - unlike many other flagship offerings, including the iPhone X and Samsung Galaxy S9 models. This matches the camera setup of last year's Galaxy Note 8. However, Samsung has this time apparently offered a fingerprint sensor below the camera system - instead of being in line with the camera system that was found on the last year model. This can be seen in the model that DJ Koh was sporting.

In addition to the glimpse of the back panel, the image shows Koh using the Galaxy Note 9 with the new S Pen. But due to the hand of the executive covering almost half of the stylus, it is difficult to observe any changes in the new development. Nevertheless, it is already rumoured to have Bluetooth support and the ability to work as a remote controller.

Koh indeed didn't show off the Galaxy Note 9 or divulge any of its features in any official capacity. However, 9to5Google reports that he stated the presence of "many new features" on the S Pen of the upcoming Galaxy Note handset. The executive also reportedly commented on the in-display fingerprint sensor technology heading to the Galaxy S10.

Having said that, if we take some of the previous reports into consideration, the Galaxy Note 9 is expected to come with a 6.4-inch QHD+ Super AMOLED Infinity Display panel with an 18.5:9 aspect ratio. The handset is also rumoured to have up to 8GB of RAM and as much as 512GB of storage option. A recent Geekbench listing pointed out that Samsung might use an Exynos 9820 SoC on the Galaxy Note 9. Some initial reports suggested the presence of an octa-core Exynos 9810 or Qualcomm Snapdragon 845 SoC, though. Koh back in February confirmed the arrival of Bixby 2.0 on the Galaxy Note 9. The new Bixby version will offer enhanced natural language processes.

As we mentioned, Samsung is set to launch the Galaxy Note 9 at its Unpacked event on August 9. The event, which will take place in New York, is also expected to bring the Galaxy Watch and Galaxy Tab S4.