While Samsung is busy in preparing the launch of the Galaxy Note 9, it has now been reported that alongside the next-generation Galaxy Note model, the South Korean company is launching the anticipated Bixby-powered smart speaker on August 9. The smart speaker, which is likely to be designed to counter Amazon Echo, Google Home, and Apple's HomePod, is said to be in development with codename "Lux" and will go on sale for about $300 (roughly Rs. 20,600). Apart from the speaker, Samsung is currently in the headlines for its plans to launch a new smartwatch model that could be the Galaxy Watch. The smartwatch - the successor to the Gear S3 - that was initially rumoured to run Google's Wear OS is now claimed to run Tizen 4.0 out-of-the-box. It is also said to go on sale starting August 24, in line with the availability of the Galaxy Note 9. Separately, a couple of renders of the Galaxy Tab A 8.0 (2018) have been leaked that are matching its design with the Galaxy Tab S4 that is already said to be aligned with the arrival of the new Galaxy Note, Galaxy Watch, and smart speaker.

The Samsung Bixby speaker with a bowl-shaped design featuring a legged bottom and lights at the top will be unveiled side-by-side with the Galaxy Note 9 launch next month, reports The Wall Street Journal alongside detailing the development of a foldable smartphone, citing people familiar with the development. The speaker is said to have features such as 'sound shifting' that will beam the audio in the direction of the user through verbal commands. Further, it is said to be marketed as a high-end music player - similar to how Apple is presently positioning its HomePod in the growing market of smart speakers. This is indeed important as Samsung is reportedly in plans to sell the smart speaker at about $300, which is higher than the $100 Amazon Echo and $130 Google Home.

At CES 2018 in early January, Bixby was showcased on select Samsung Smart TV models and Family Hub refrigerators. Samsung is also in development to upgrade the existing experience by launching Bixby 2.0 that is expected to debut on the Galaxy Note 9 next month. Similarly, the next-generation Samsung smartwatch that could come as the Galaxy Watch is said to include a Bixby integration to take on Siri-backed Apple Watch.

Coming to the Galaxy Watch, it was previously reported that the smartwatch will come with Google's Wear OS. But a new report by SamMobile claims that Samsung is using Tizen 4.0 on the new smartwatch model. Notably, the latest Tizen version focuses majorly on the Internet of Things (IoT) ecosystem and brings a bunch of voice control APIs to help expand voice-based personal assistants. This could help the company bring Bixby to its smartwatch lineup as well.

The Galaxy Watch is said to come with some healthcare features and "killer apps" related to the fitness features. All this are likely to be aimed at uplifting the experience over the Gear S3 that was launched in India in January last year.

In addition to the fresh rumours around the Bixby speaker and Galaxy Watch, a couple of official renders of the Samsung Galaxy Tab A 8.0 (2018) have surfaced online. The renders, courtesy NieuweMobiel.NL, show that the tablet will not include a home button. This matches the previously leaked design of the Galaxy Tab S4. Compared to last year's Galaxy Tab A 8.0 (2017) that was launched in September, its successor appears to have thinner bezels and sport a 2.5D curved glass panel. Further, the renders highlight August 9 as the date on the lock screen. This suggests that Samsung could launch the new tablet model at its Unpacked event in New York where the Galaxy Note 9 and other Galaxy-Series hardware are debuting. 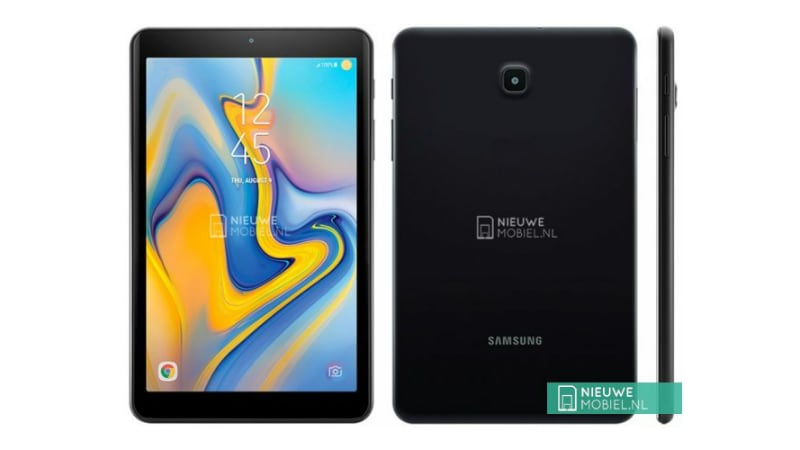 Specifications of the Galaxy Tab A 8.0 (2018) aren't revealed. However, considering its predecessor, the new model is likely to be another budget tablet with an entry-level hardware - unlike the Galaxy Tab S4 that was leaked last week with an optional keyboard and an all-new S Pen. The Galaxy Tab S4 is also claimed to run Android 8.1 Oreo out of the box and feature a 10.5-inch Super AMOLED display with a 2560x1600 pixels resolution and a 16:10 aspect ratio. It is also expected to have a Qualcomm Snapdragon 835 SoC, coupled with 4GB of LPDDR4X RAM and 64GB of onboard storage, and sport a 13-megapixel rear camera sensor as well as a 7300mAh battery.

Further reading: Samsung Galaxy Watch, Samsung Galaxy Tab A 8.0 2018, Samsung, Bixby
Jagmeet Singh Email Jagmeet
Jagmeet Singh writes about consumer technology for Gadgets 360, out of New Delhi. Jagmeet is a senior reporter for Gadgets 360, and has frequently written about apps, computer security, Internet services, and telecom developments. Jagmeet is available on Twitter at @JagmeetS13 or Email at jagmeets@ndtv.com. Please send in your leads and tips. More
YouTube Adds Hashtags to Video Titles, Descriptions for Better Search
Fortnite's Optimisations for Android, iOS, and Switch to Benefit All Developers With Unreal Engine 4.20