Buoyed by high demand for smartphones, the mobile handset market in India is estimated to have grown by 14.7% in 2012-13 to touch Rs. 35,946 crore, according to a Voice&Data Survey.

The market grew from Rs. 31,330 crore in FY'12 with Korean electronics maker Samsung dethroning Nokia from the top position this year, the survey said.

The survey attributed Samsung's rise in Indian market to its rich product portfolio catering to customers of all budget categories.

"Samsung handset prices range from Rs. 1,500 to Rs. 50,000 and come in varied screen sizes. These two factors helped the company grab customer's attention, besides the product quality and new features," it added. 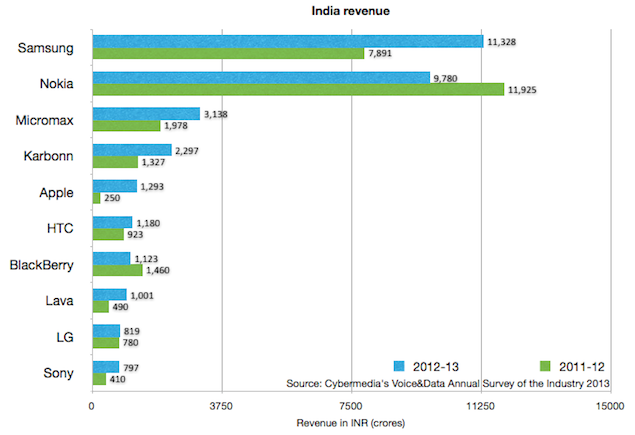 "Nokia's drop in market share started when the company failed to sense the need of a dual-sim phone for the Indian consumer, and the same was tapped by the Indian players years ahead of global players like Nokia," it added.

Nokia's Lumia series phones that witnessed huge growth globally in the initial phases could not draw much attention in India.

Though India was never a focus market for the Cupertino-based smart devices maker till some years back, in the last two years, the iPhone maker has started making inroads slowly.

"In the last fiscal, Apple made some disruptive changes in its sales strategy, which paid off. Appointing Ingram Micro and Redington as the national distributors for their entire sales, and offering EMI schemes to the consumers to buy the most coveted Apple product changed the game for them," the survey said. 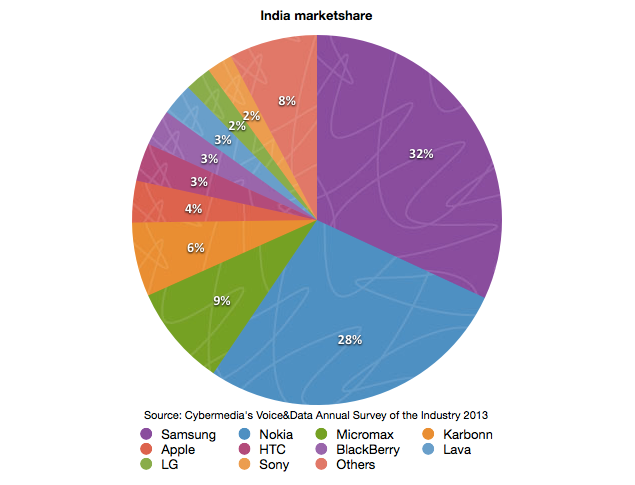 Apple now enjoys 3.6% market share in India having the smallest number of handset models in its portfolio.