Apple, Samsung saw low sales due to high price of their devices

Counterpoint's latest report suggests that the global smartphone shipments declined 4 percent annually in 2018, and saw a record decline of 7 percent in the fourth quarter of last year. Apple and Samsung, in particular, saw a decline in shipments due to high price points, no groundbreaking innovation, and tough competition from other brands like Huawei, Oppo, and Vivo. Poor smartphone sales in China were also largely responsible in the overall decline in smartphone shipments. Despite the slowing smartphone market scenario, brands like Huawei and Xiaomi flourished, the latter particularly, because of its success in the Indian market. 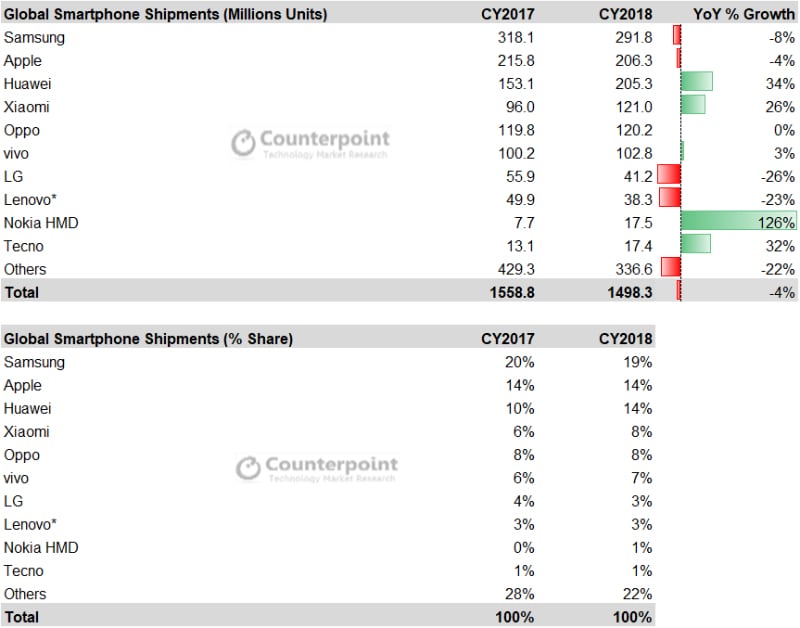 The report blames OEMS' high price tag on smartphones without offering any groundbreaking innovation that would convince consumers to upgrade their old device. This made consumers hold onto their devices longer, especially higher-end phones.

Tarun Pathak Associate Director at Counterpoint Research said, "The decline in smartphone shipments can be attributed to lengthening replacement cycles in developed markets like US, China and Western Europe. Smartphone OEMs tried to push sales by adding features such as AI, multiple camera assemblies, full-screen displays, in-screen fingerprint scanners etc. but consumers held on to their devices longer due to the absence of groundbreaking innovations and higher prices of devices being offered by the OEMs."

Canalys recently also reported on Apple's decline stating that the tech giant shipped 65.9 million iPhone units in the first fiscal quarter of this year (or the fourth quarter of the last calendar year). The shipments represent a 15 percent year-over-year decline from the 77.3 million iPhone units shipped during the first fiscal quarter of last year. IDC also reports that 2018 was the worst year ever for smartphone shipments with global smartphone volumes declining 4.1 percent in 2018 with a total of 1.4 billion units shipped for the full year.

Further reading: Counterpoint Research, Samsung, Apple, Huawei, Xiaomi
Tasneem Akolawala Email Tasneem Tasneem Akolawala is a Senior Reporter for Gadgets 360. Her reporting expertise encompasses smartphones, wearables, apps, social media, and the overall tech industry. She reports out of Mumbai, and also writes about the ups and downs in the Indian telecom sector. Tasneem can be reached on Twitter at @MuteRiot, and leads, tips, and releases can be sent to tasneema@ndtv.com. More
Red Dead Redemption 2 Discounted in India for the First Time
WhatsApp Announces 'Startup India-Grand Challenge'