While Samsung hasn't yet made any confirmation about its first Android Go smartphone that's been doing the rounds of the rumour mill for the past few weeks, the hardware has now been leaked in some images. The leaked images show the Samsung handset with apps such as Google Go, Maps Go, and YouTube Go that are meant for the smartphones running Android Oreo (Go edition). However, the stock Android experience is missing, and the model in the images looks to run Samsung's proprietary Experience UX. Some previous reports claimed that the Android Go model will debut as the Galaxy J2 Core and come in multiple variants with model numbers SM-J260F, SM-J260M, and SM-J260G.

As per the leaked images, courtesy SamMobile, the unknown Samsung smartphone doesn't have any thin bezels or a wider aspect ratio that is trending in the current market. The model, however, does include a group of Google's Android Go apps, including Google Go, Maps Go, and YouTube Go, and shows Android 8.1 version to confirms its identity as an Android Go device. But it appears that unlike the first batch of Android Go handsets, such as the Lava Z50, Micromax Bharat Go, and Nokia 1, Samsung's latest offering runs Samsung Experience UX instead of stock Android. 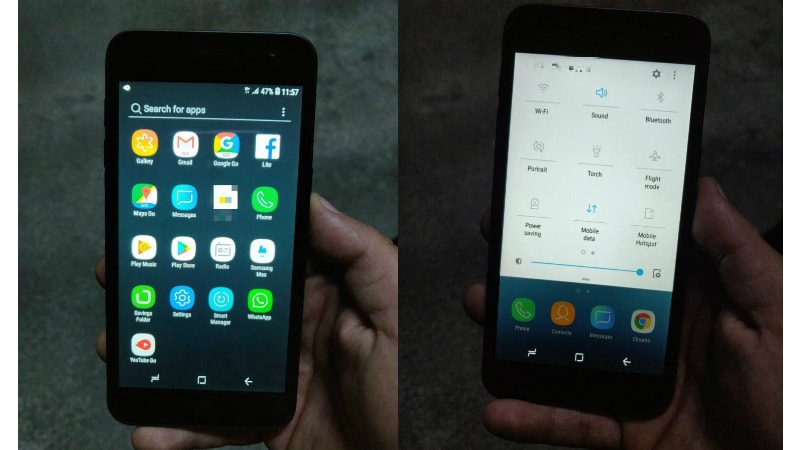 Notably, the purpose of Android Go is not to offer a vanilla Android experience - it is to deliver an optimised experience on basic hardware. The official Android Go website, as highlighted by SamMobile folks, also doesn't promise the presence of stock Android on devices based on the Android Go programme. This is likely to be the reason why Samsung is providing its native experience.

The experience is similar to the one featured on the premium offerings, including the Galaxy S9. There are on-screen keys for navigation and a Quick Panel with toggles for Wi-Fi, Sound, Bluetooth, Portrait, Torch, and Flight Mode. Icons on the screen are also reminding us of the flagship Galaxy model.

The back side of the Android Go smartphone, as per the leaked images, has a single camera module, paired with an LED flash. There is also Samsung's branding on top of a plastic rear panel.

Last month, the Android Go smartphone was found to have multiple variants for a list of markets, including India, UK, Uzbekistan, Germany, Italy, Russia, and France among others. A Geekbench listing of the handset also detailed its specifications and confirmed the availability of a 5-inch Super AMOLED display and a 1.4GHz quad-core Exynos 7570 SoC. It is also said to include 1GB of RAM, 16GB of onboard storage, 8-megapixel rear camera sensor, 5-megapixel front camera sensor, and a 2600mAh battery.

As we mentioned, there isn't any information on the launch of Samsung's Android Go smartphone. But considering the increase in the number of leaks and rumours, it could take place sometime in the coming days.

Further reading: Samsung, Android Go
Jagmeet Singh Email Jagmeet Jagmeet Singh writes about consumer technology for Gadgets 360, out of New Delhi. Jagmeet is a senior reporter for Gadgets 360, and has frequently written about apps, computer security, Internet services, and telecom developments. Jagmeet is available on Twitter at @JagmeetS13 or Email at jagmeets@ndtv.com. Please send in your leads and tips. More
Oppo Find X Teardown Shows How the Camera Slider Works