Hot on the heels of the Samsung Galaxy S Series launch, the South Korean tech giant Samsung on Monday unveiled the fresh Galaxy A Series phones. The company says it is starting the 2019 Galaxy A Series rollout with the launch of Galaxy A30 and Galaxy A50 models. Featuring 6.4-inch Infinity-U Super AMOLED screens, the Samsung Galaxy A30 and Galaxy A50 phones come with 4,000mAh battery. It is rumoured that Samsung will also bring the Galaxy A10 and Galaxy A20 smartphones in the lineup over the coming months. Separately, Samsung India has sent out invites for a press event on February 28 in Mumbai, where the company is expected to share the India launch details of the Galaxy A Series phones.

Samsung has not shared any pricing or availability information at this point, but we won't have to wait for long for the official details, considering the Samsung event in India next week. Part of the company's mid-tier portfolio, the Galaxy A30 and Galaxy A50 smartphones seem to continue what Samsung started with the new Galaxy M Series phones this year. The Galaxy A Series, however, seems much more polished and premium than the Galaxy M Series phones, at least on paper. As we mentioned, Samsung is holding an event on February 28 in Mumbai, where the Samsung Galaxy A-Series launch is expected

“We are committed to providing meaningful progress to everyone for a better mobile experience, and that innovation starts with the upgraded Galaxy A Series,” said DJ Koh, President and CEO of IT & Mobile Communications Division at Samsung Electronics in a statement. “People are changing the way they connect, and their smartphones need to keep up. Our new Galaxy A Series offers improvements to the essential features that will support these live interactions, with diverse options to meet their ever-changing needs.” 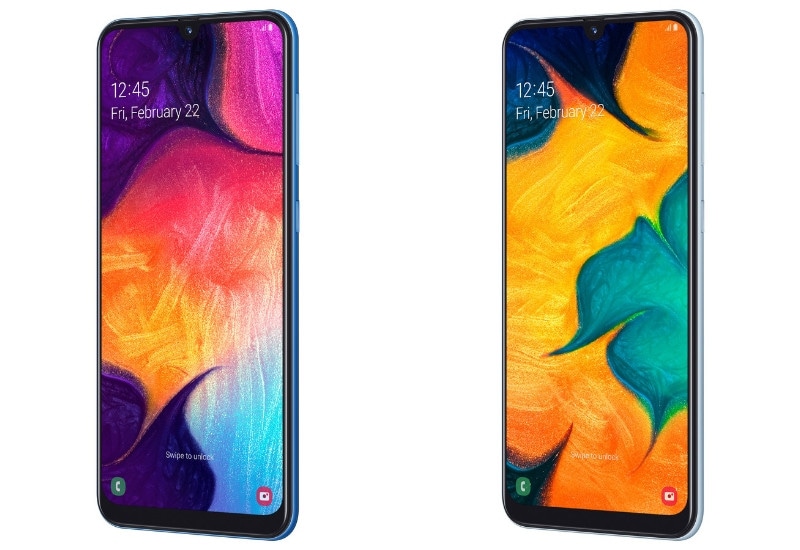 According to Samsung, the Galaxy A50 features a 6.4-inch Super AMOLED Infinity-U screen with full-HD+ (1080x2340 pixels) resolution and a 19.5:9 aspect ratio. The phone also packs 4GB/ 6GB of RAM, 64GB/ 128GB of inbuilt storage, and a microSD card slot (up to 512GB). Additionally, the company has packed a 4,000mAh battery, unnamed octa-core processor, and in-display fingerprint sensor in the Galaxy A50.

The exact Android version is unclear at this point, however the phone does include Bixby Vision, Bixby Voice, Bixby Home, and Bixby Reminder features.

Same as the Galaxy A50, the Galaxy A30 also sports a 6.4-inch Super AMOLED Infinity U screen with full-HD+ (1080x2340 pixels) resolution and 19.5:9 aspect ratio. The phone is powered by an unnamed octa-core processor, coupled with 3GB/ 4GB of RAM, 32GB/ 64GB of inbuilt storage, and a microSD card slot (up to 512GB). Other specifications of the phone include a 4,000mAh battery and a rear capacitive fingerprint sensor. There is no word on the exact Android version in the phone, however it does include Face Unlock, Bixby Home and Bixby Reminder features.

Both Samsung Galaxy A Series 2019 models also include Samsung Pay and fast charging, but the availability of these features will depend on the market.

Further reading: Samsung Galaxy A30, Samsung Galaxy A50, Samsung Galaxy A30 specifications, Samsung Galaxy A50 specifications
Gaurav Shukla Email Gaurav Part of Gadgets 360 news team, Gaurav handles a multitude of responsibilities from covering the latest happenings in the world of science and technology to editing and assigning news stories. In another life, he used to be a technology blogger, writing about Android and its massive ecosystem. Paranoid about online surveillance, Gaurav believes an artificial general intelligence is one day going to take over the world, or maybe not. He is a big Person of Interest fan though. More
Sony WI-C600N Wireless Noise Cancellation Neckband Headphones Launched in India
MWC 2019: Intel Announces New Chips, 5G Infrastructure Deals