Samsung Galaxy A10 users are getting Android 10 with March security patch.

As per an update screenshot shared by a user on Samsung Community, Samsung Galaxy A10 update comes with the firmware version A105FDDU3BTCA. Users can check the availability of the update by going to Settings > Software update. The update can be then downloaded by tapping Download and install. 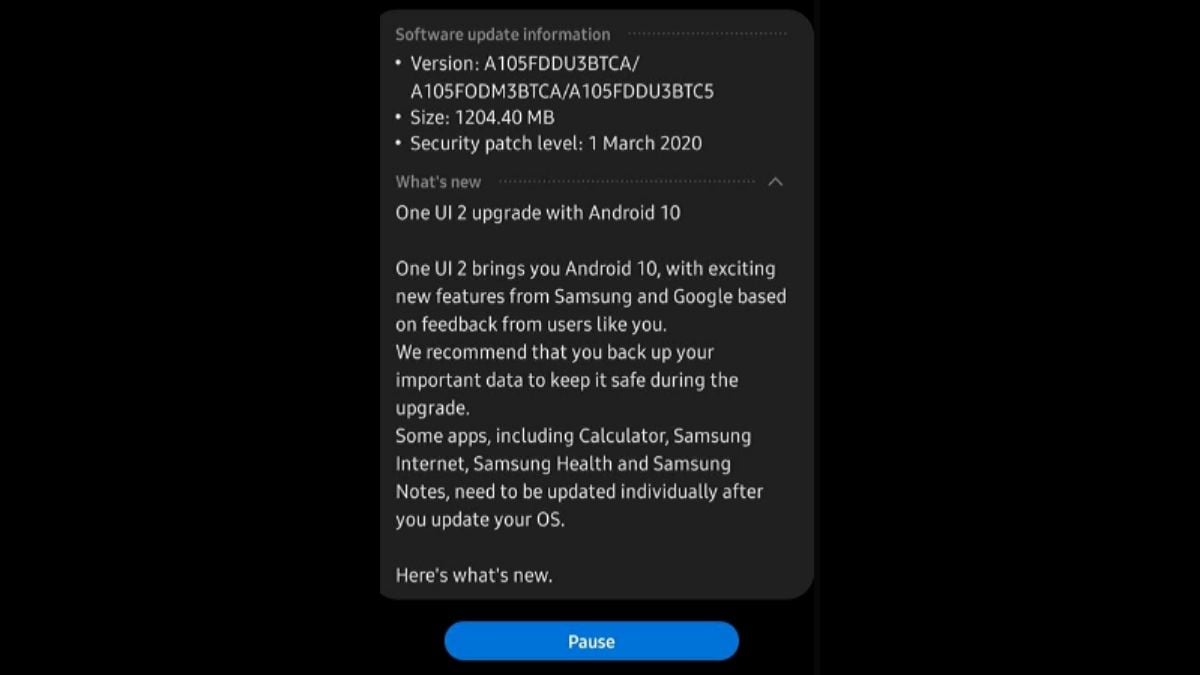 "One UI 2 brings you Android 10, with exciting new features from Samsung and Google based on feedback from users like," Samsung update states. The update description further stated that some apps including Calculator, Samsung Internet, Samsung Health and Samsung Note need to be updated individually after the operating system update.

Interestingly, as per the roadmap that Samsung released for the India market in November last year, the Galaxy A10 was scheduled to receive the system update in May.

Recently, [Samsung Galaxy J6](https://gadgets.ndtv.com/samsung-galaxy-j6-5454) reportedly received its Android 10 update but it was only limited to Panama. Galaxy J6 users in India as per the roadmap will receive the update next month.

Further reading: Samsung Galaxy A10, Samsung Galaxy A20e, Samsung, Android 10, One UI 2
Abhik Sengupta Email Abhik Abhik Sengupta writes about smartphones and tablets for Gadgets 360, out of Delhi. Abhik is working as a sub-editor for Gadgets 360 and has also frequently written about mobile apps and data privacy. Abhik is available on Twitter at @abhiksengupta and can be reached out on abhiks@ndtv.com. More
Disney+ Hotstar Has Around 8 Million Paid Subscribers, Disney Claims
Samsung Galaxy A21 With 4,000mAh Battery, Quad Rear Cameras Launched: Price, Specifications