Samsung Galaxy A03 is likely to sport a 3.5mm audio jack. 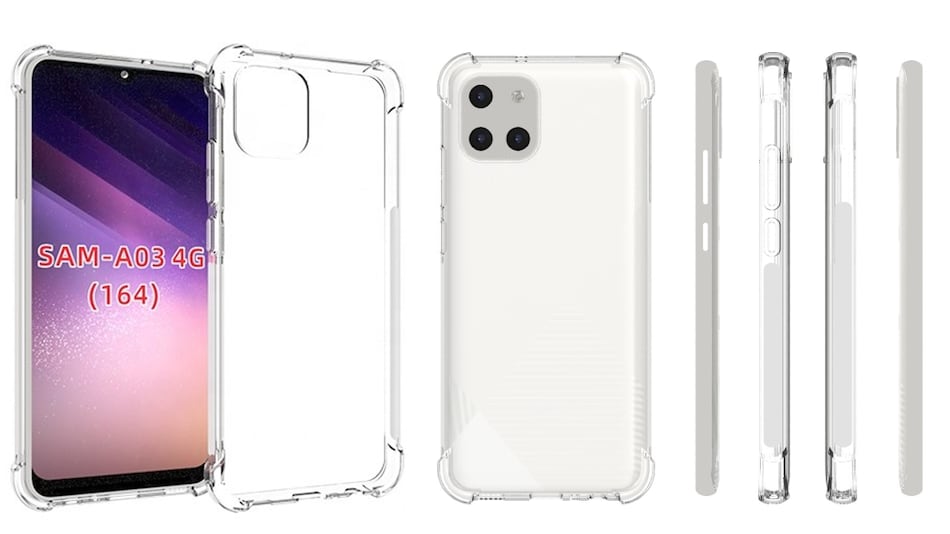 Samsung Galaxy A03 renders have leaked online, hinting at the smartphone's possible design ahead of the rumoured launch. The renders suggest a triple rear camera setup and a waterdrop-style notch display. Recently, the support page of Samsung Galaxy A03 had gone live in India, hinting at an imminent launch. The smartphone has also been spotted on several certification sites, including Wi-Fi Alliance and US FCC. It had even surfaced on the Geekbench benchmarking site, hinting at a Unisoc SoC. This is likely to be an entry-level budget smartphone from Samsung.

Tipster Sudhanshu Ambhore tweeted some renders of the rumoured Samsung Galaxy A03. The renders suggest that the phone features a waterdrop-style notch display with a significant chin at the bottom. On the back, Samsung Galaxy A03 has a square-shaped camera module that houses three sensors and a flash. The volume and power buttons sit on the right edge. A USB Type-C port and a 3.5mm audio jack sit on the bottom edge. A fingerprint sensor wasn't spotted in the renders.

Samsung Galaxy A03 India launch could be around the corner as its support pages are now live on Samsung's website in India and Russia. These pages mention that the soon-to-be-launched Galaxy smartphone will have SM-A032F/DS as its model number. Previous reports suggest that the Samsung Galaxy A03 may be powered by a Unisoc chipset, paired with either 2GB or 3GB of RAM. The upcoming smartphone has also been tipped to pack a 5,000mAh battery.

Samsung is yet to officially announce the budget-friendly smartphone.