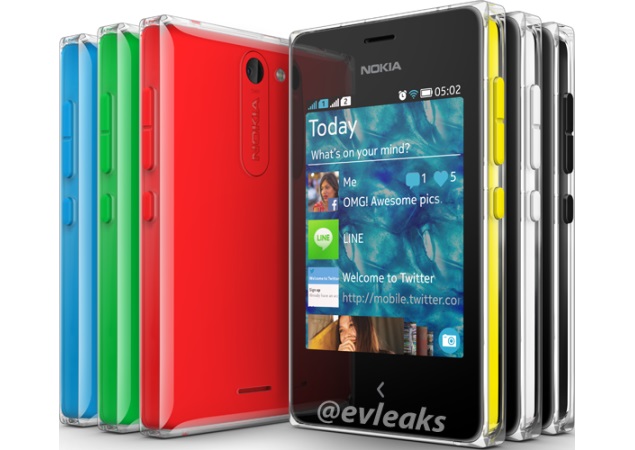 We have been hearing for a while that Nokia is working on a successor to the popular Nokia Asha 501, the Asha 502. Now it seems like the first image of the rumoured feature phone has been leaked.

A tweet from infamous phone tipster, @evleaks has revealed the Nokia Asha 502 and has also hinted that the phone will likely be announced this year. While the exact availability is not revealed yet, it is likely that the Nokia Asha 502 will be unveiled sometime in the fourth quarter.

The leaked image reveals the yet-to-be-announced feature phone in its full glory and confirms that the Asha 502's design is in line with the design language of the recently launched Nokia Asha 501. It's worth pointing that the leaked image of the alleged Asha 502 also shows an LED flash accompanying the rear camera, a feature that was missing in its predecessor. The phone appears to come preloaded with Line instant messaging app, as per the leaked image. Moreover, the image shows the device in a glass casing which we assume would come bundled with the device.

Specifications of the alleged Nokia Asha 502 have been leaked in past and reveals it would feature a polycarbonate design with a 3.2 to 3.5-inch scratch resistant display which was said to feature a higher resolution than that of the Asha 501. It is likely to be slimmer and lighter than its predecessor. The RAM could be in the range of 128 to 512MB while the processor is expected to be clocked at 1-1.2GHz. The Asha 502 is said to support 3G connectivity, the feature that was widely missed on the Asha 501. It could sport a 5-megapixel rear camera with the new Nokia Camera app for Asha devices. The phone is also expected to come with dual-SIM functionality.

Further it was also revealed that the Asha 502 would feature Nokia SLAM Bluetooth transfer for faster sharing of files, pictures and even videos. However, there is no official word from Nokia about the availability and pricing of the Asha phone, yet.