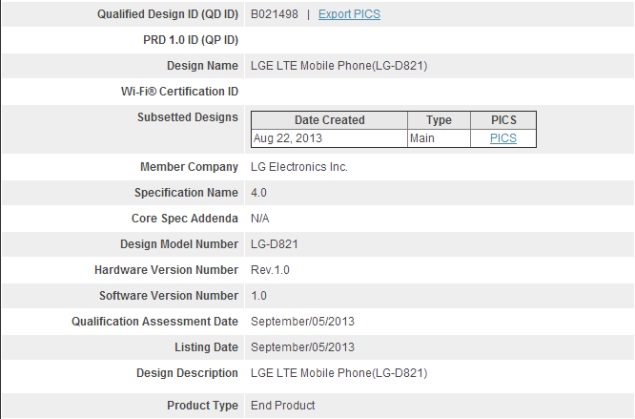 The alleged Google Nexus 4 successor has set the rumour mill spinning, once again. After the appearance of the mysterious LG D820 device on the FCC's website, indicating that the smartphone would sport a large camera sensor at the back, another LG branded device has popped up, this time on the Bluetooth SIG website.

The listing cites a device with model number LG-D821 and reveals that it is an LTE enabled device. The listing unfortunately does not offer anything new and doesn't shed any light on the internals of the device.

A German site, Sim Only Abonnement notes that the LG D821 spotted in the Bluetooth SIG filing may be an LTE variant of the rumoured Nexus 4 successor while the LG D820 spotted earlier at the FCC could be the 3G variant of the same phone.

Recently, the LG D820 device was spotted on the FCC website that appeared to have the same dimensions as the Nexus smartphone that was spotted a few days back in the Android KitKat video released by Google.

Some details revealed by the LG D820's FCC listing include the firmware M8974A running on the device and the software version listed as, "aosp_hammerhead-userdebug KyeLimePieFACTORY eng.sangjoon84.lee.20130618.015154." The device is expected to come with connectivity options like GSM, CDMA, WCDMA, NFC, Wi-Fi, Bluetooth and various LTE bands, as per the listing.

The alleged Nexus 5 has been rumoured to sport a 5.2-inch display just like the LG G2 and also come with the Qualcomm Snapdragon 800 processor. However, there's no word on when the next Nexus phone will be launched, though it is expected to be unveiled within the next couple of months.