Robert Downey Jr. Blames 'Assistant' for Mistakenly Tweeting From a Huawei Phone, Instead of a OnePlus 7 Pro

Robert Downey Jr. has blamed his assistant for the goof-up last week, which saw the OnePlus brand ambassador posting from a Huawei P30 Pro.

OnePlus roped in Hollywood A-lister, Robert Downey Jr. as its brand ambassador for the OnePlus 7 Pro a couple of months back when the phone launched. The actor also has a Weibo account, which is a popular chat platform in China, for keeping in touch with his fans and also promoting the OnePlus 7 series. However, a few days back, he accidentally forwarded a Weibo message from a Huawei P30 Pro, which is a direct competitor to the OnePlus 7 Pro. This news made headlines across all media channels and in order to douse the fire, he posted another message to try and make light of the situation.

A new post on the Robert Downey Jr. Weibo account reads, “Well, I guess it's time to upgrade my assistant to a new OnePlus 7 pro so mistakes don't happen again. @OnePlusmobilephone - up for a quick delivery run?” The post was an attempt to diffuse the situations and make light of the goof-up which happened. Since Weibo is a Chinese chat platform, this much is obvious that OnePlus has someone posting messages on Downey Jr.'s behalf.

It started with a forwarded message on Wiebo, a few days back, when users spotted that message was sent from a Huawei P30 Pro (Review) and not a OnePlus smartphone. The Robert Downey Jr. Weibo post was immediately taken down but of course, not before enough screenshots were taken and spread across social media. This became kind of a big deal, which is why OnePlus seems to have added this follow-up post to try and get ahead of the situation. 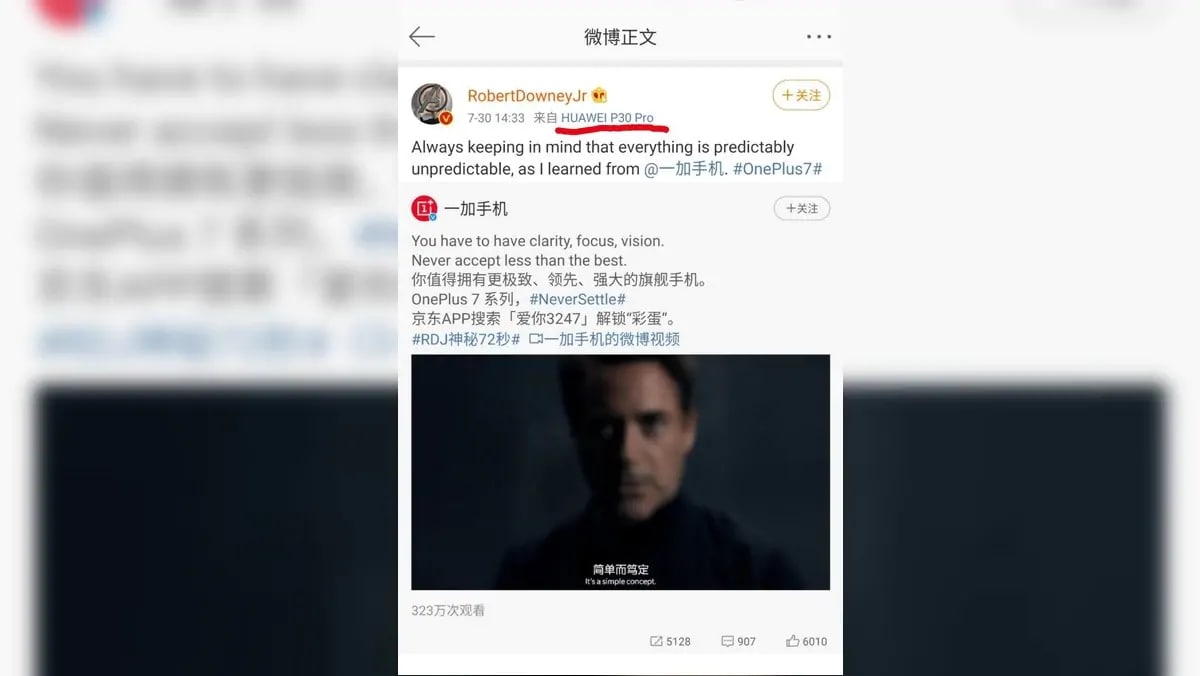 This is not the first time we've seen celebrities or brand ambassadors of a brand, inadvertently tweeting or posting public messages from rival products. In an instance late last year, Samsung's Nigeria unit was found tweeting about Galaxy Note 9 (Review) using an iPhone.

Further reading: OnePlus, OnePlus 7 Pro, OnePlus 7, Robert Downey Jr., Huawei
Roydon Cerejo Email Roydon Roydon Cerejo writes about smartphones and laptops for Gadgets 360, out of Mumbai. He is the Deputy Editor (Reviews) at Gadgets 360. He has frequently written about the smartphone and PC industry and also has an interest in photography. With over a decade of experience covering the consumer technology space, he is also an avid sci-fi movie and TV show geek and is always up for good horror flick. Roydon is available at roydon@gadgets360.com, so please send in your leads and tips. More
Poco F1 Price in India Cut, 6GB RAM + 128GB Storage Variant Now Comes at Rs. 18,999
Preacher Season 4, Episode 1 Now Streaming on Amazon Prime Video in India

Robert Downey Jr. Blames 'Assistant' for Mistakenly Tweeting From a Huawei Phone, Instead of a OnePlus 7 Pro
Comment