Rivals Dash To Support Apple Pay For Fear Of Losing Out 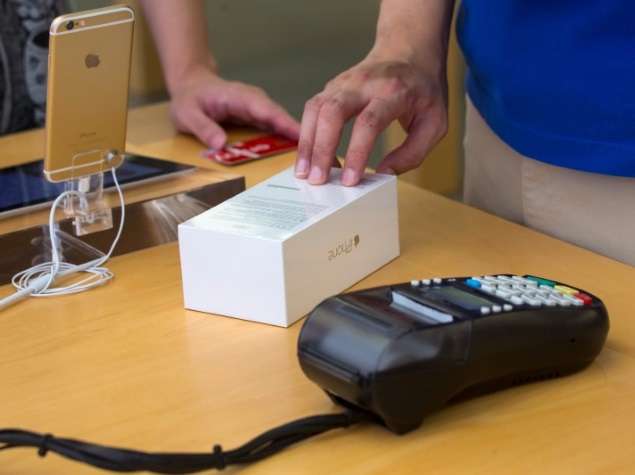 In the hype-fuelled technology industry, "revolutionary" is a word in danger of losing its meaning.

But Apple Inc's new mobile payments system - unveiled just ten days ago - is already winning over the heavyweights of the financial industry and signaling the likely demise of lesser payment alternatives.

Its secret? Apple Pay preserves many existing relationships while inserting a new dominant player - itself - as kingmaker. Its potential audience? The 800 million Apple users who have already connected credit and debit cards to iTunes accounts.

"Apple's approach appears to be collaborative with traditional payment networks, instead of competitive, and it's much less disruptive," says Nathalie Reinelt, a payments expert with banking consultancy Aite Group.

Apple Pay allows consumers using new Apple phones or soon-to-be-released tablets and smartwatches to buy things by simply holding the device up to readers installed by store merchants. Launched on Friday in the new iPhone 6 Plus (Review), it was first unveiled on Sept 9, when the giants of the credit card industry - Visa, MasterCard and American Express - declared their commitment to making the Apple service work.

Big brand retailers have also signed up and now major banks are racing to out-do on another in promoting the service to customers, hoping to win the lion's share of their spending and the lucrative transaction business that comes with that.

Softcard, the U.S. consortium of top U.S. mobile network operators, AT&T , Verizon and T-Mobile USA, said last week that it was working with Apple to develop a SIM-card based version in 2015.

And French payments company Ingenico signed a deal this week with Loewe, the Spanish luxury handbag and fashion retailer owned by LVMH, to provide Apple Pay services for its network of 160 stores in 34 countries.

(Also See: iPhone 6 and iPhone 6 Plus NFC Chips Only for Use With Apple Pay)

"Without a doubt, the rush is on to cooperate," said Forrester Research payments analyst Denée Carrington.

Square, the credit-card reader start-up that is the second act for Twitter founder Jack Dorsey, has said its terminals used by many retailers will accept Apple Pay from customers.

Apple is already working with Twitter to create a "Buy Now" button for Twitter users and with Facebook to offer an Apple Pay "Buy" button to its users, according to Trip Chowdhry, a financial analyst at Global Equities Research.

Not so fast
Payment systems connect consumers to their money through an extremely complex supply chain of banks, credit card issuers, transaction processors, retailers and other merchants who both cooperate and brutally compete with each other for advantage.

Also involved are hundreds of independent payment technology firms - from start-ups to mid-sized players - who have built up healthy businesses spotting and then supplying missing pieces of the system. Banks, telecom network operators and major retailers turn to such specialists to create bespoke payment systems.

It's these mid-size mobile payments suppliers that have the most to lose from Apple's end to end payments system.

Monitise Plc appears to be an early casualty of this rapid redrawing of industry alliances. The London-listed company set out 11 years ago as an innovative company making payments work on an array of different mobile phones and in the process doubling revenues each year until recently.

Key to its success was backing from Visa, the world's largest credit card company, which helped it win deals with banks and financial transaction providers worldwide.

But on Thursday Visa said it was looking to sell its remaining stake in Monitise in order to focus on its own in-house systems, costing Monitise one-third of its market value, or about 290 million pounds.

Adds Forrester's Carrington: "It does give other smaller, as well as larger players like (eBay's) PayPal, reasons to pause."

Even the world's largest credit card companies are rushing to embrace Apple because they otherwise risk being cut out of the action, says Ben Robinson, chief strategy officer at banking software supplier Temenos.

"If I can make a payment to a merchant simply by touching my phone or sending a message ... that merchant can get value immediately from that transaction without in any way having to use (the major credit card companies)," Robinson says.

He made the comments in Geneva this week while announcing the results of a global poll of 198 senior bankers.

The Temenos survey found that 23 percent of respondents cited technology firms as their biggest competitive threat, ahead of other big banks, cited by 20 percent. Such fears have been on the rise from 11 percent in 2012 to 18 percent in 2013.