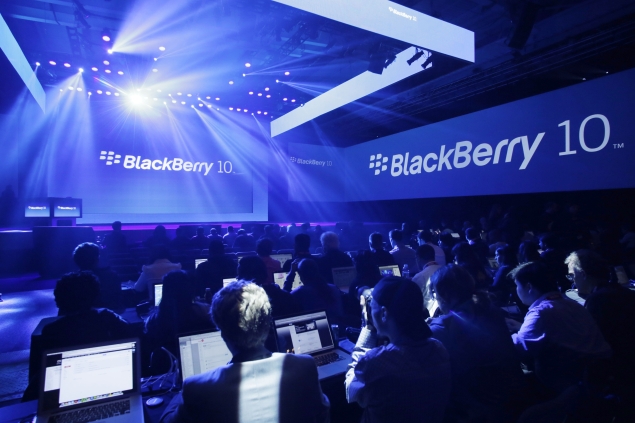 After lengthy delays, Research In Motion Ltd. unveiled its first two phones with the new BlackBerry 10 system. The Q10 will have a physical keyboard, while the Z10 has only a touch-screen keyboard.

RIM redesigned the system to embrace the multimedia, apps and touch-screen experience prevalent today. The question is whether there's time for the once-pioneering BlackBerry to catch up to Apple's trend-setting iPhone and devices running Google's Android system.

RIM CEO Thorsten Heins is hosting the main event in New York. Video of his appearance is being shown at other RIM events in Toronto, London, Paris, Dubai, Johannesburg, New Delhi and Jakarta, Indonesia.

RIM initially said BlackBerry 10 would come by early 2012, but then the company changed that to late 2012. A few months later, that date was pushed further, to early 2013, missing the lucrative holiday season. The holdup helped wipe out more than $70 billion in shareholder wealth and 5,000 jobs.

RIM had shown off prototypes and previews before. Wednesday's event is the first time RIM is showing a complete product, with details on prices and availability.

Most analysts consider a BlackBerry 10 success to be crucial for the company's long-term viability.

RIM is promising a speedier device, a superb typing experience and the ability to keep work and personal identities separate on the same phone. Previews of the BlackBerry 10 software have gotten favorable reviews on blogs. Financial analysts are starting to see some slight room for a comeback. With smartphone sales growing, the BlackBerry 10 can succeed without iPhone and Android users switching.

Regardless of BlackBerry 10's advances, though, the new system will face a key shortcoming: It won't have as many apps written by outside companies and individuals as the iPhone and Android.